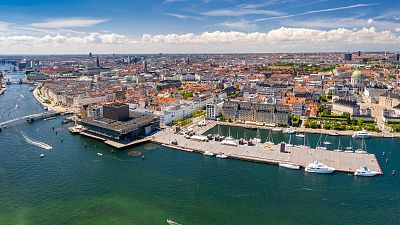 Environmentalists in Denmark are taking their fight to the European Union to stop the construction of an artificial island in Copenhagen which was greenlit by Danish lawmakers on Friday.

Denmark’s parliament voted in favour of building Lynetteholm - a 20 billion Danish kroner (€2.6 billion) artificial island in the capital's harbour - which will be home to at least 35,000 people and connected to the city by an underwater tunnel and metro line.

The approval of the artificial island has been criticised for not having investigated enough the environmental consequences of its construction, among other issues.

Frederik Roland Sandby, the Secretary-General of the Climate Movement in Denmark ("Klimabevægelsen i Danmark"), said the project, which has been billed as having environmental benefits for the city, was another example of "greenwashing".

"This is being framed as a 'green project'. That has nothing to do with the climate, the impact on the environment or climate change which is what our complaint is about," he told Euronews.

The government have said the artificial island - which will be about 3 sq kilometres in size - will also function as a barrier against future flooding resulting from rising sea levels due to storm surges and climate change.

"Lynetteholm will provide effective storm surge protection for Copenhagen from the north and thus provide security for the city’s citizens, who are likely to experience more extreme weather in the coming decades," Denmark’s transport minister Benny Engelbrecht said in a statement last year.

Having consulted with climate and environmental experts and lawyers, Sandby said his organisation is now in a position to file a lawsuit against the Danish government's decision to plough ahead with the project.

"What we’ve done is we’ve complained to the EU because there are EU regulations that are being overstepped or broken," he said.

"So we’re waiting for our complaint to go to the EU. We hope that because we've complained to the EU about this, that the Danish government would know that they’re going to meet a lawsuit in the EU because they have broken the law".

What is the Lynetteholm project?

The project is set to last 50 years with work on Lynetteholm beginning in 2035 and is to be completed by 2070.

It is hoped the island will help solve the capital's growing housing shortage and help ease traffic congestion by rerouting cars around the city centre rather than through it.

It will be built north of Refshale Island, a gentrified former industrial area, while a harbour tunnel is planned to be connected to the existing E20 highway.

The plan was presented by the centre-right government of then prime minister Lars Loekke Rasmussen in October 2018 and was immediately approved by the Copenhagen municipality.

The go-ahead was given Friday in an 85-12 vote in the Danish parliament, a vote Sandby described as "startling".

Reacting to the news, Anne Skovbro, CEO of urban developers By & Havn who will work on the island's construction, welcomed the parliament's cross-party decision.

"Lynetteholm is an important future and climate protection of Copenhagen for the benefit of the city's young and future generations," she said in a statement.

"The project has been environmentally assessed and qualified in consultation with the country's leading experts and in dialogue with Copenhageners, and therefore the Folketing has today been able to adopt Lynetteholm on a well-documented and informed basis".

Copenhagen citizens against the project

Despite the purported benefits of the Lynetteholm project, many Copenhageners are "very sceptical" of the decision, according to Sandby.

"This is something that is going to happen for the next 50 years, for the rest of these people’s lives. So, they are very much against the decision. There has been a major citizen mobilisation towards stopping this project".

While the feelings of the city's residents are also a consideration, the Climate Movement in Denmark's position is a concern for the environmental cost of the project if it goes ahead.

"Our complaint is that the climate and the environment are being very much forgotten about in the construction and the assessment plans that are being produced for it," Sandby said.

“We’re technically not saying we are against the project of producing something like Lynetteholm. We’re just saying that if we do that, we need to consider the climate and the environment and that has not been done here.

"We are in the midst of a climate crisis and this has to be taken into account".