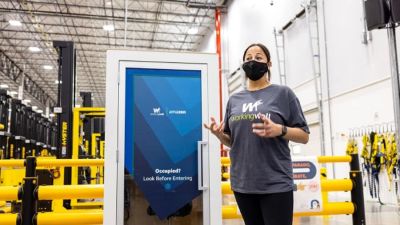 Tech giant Amazon revealed part of its new "WorkingWell" programme on Thursday - and it did not go well.

In a now-deleted video posted to the company's official Amazon News Twitter account, the company unveiled the "ZenBooth" – a portaloo-sized cabin containing a desktop computer, pot plants, a fan and a ceiling painted to look like a blue sky.

Announced earlier this month, WorkingWell is "a new programme that helps Amazon employees focus on their physical and mental well-being," the company said.

A key part of the WorkingWell programme is "AmaZen," a meditation and mindfulness initiative provided to Amazon warehouse employees via the computer in the ZenBooth.

But internet users responding to the company were quick to criticise the ZenBooth, with many drawing comparisons between it and the Suicide Booths in dystopian sci-fi animated series Futurama.

According to Amazon, the ZenBooth is the brainchild of employee Leila Brown, the workplace health and safety programme manager for AmaZen.

"At Amazon, I get to do what I love. Every day I get to use my knowledge and skill set to work with creative people to create something great for employees," she said.

The booth furore comes after the same Amazon News Twitter account made headlines in March for arguing with United States Congressman Mark Pocan over whether or not Amazon employees were sometimes forced to urinate in water bottles while on shift.

Amazon later apologised, saying it had not taken its "large driver population" into account.

"This is a long-standing, industry-wide issue and is not specific to Amazon," the company said.

Also on Thursday, Amazon employees in countries including the UK, France, Germany, the USA, Bangladesh and Mexico demonstrated in support of workers at Amazon suppliers in Bangladesh and Cambodia who were laid off when the factories closed last year.

The workers at the factories – which were not owned by Amazon – claim they are still owed back pay and severance payments from their former employers.