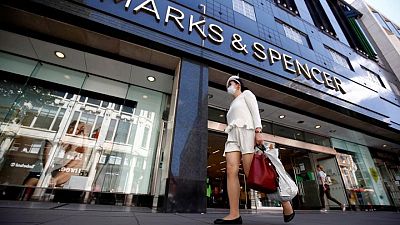 The British retailer, in the midst of its latest turnaround attempt after decades of failed reinventions, has closed or relocated 59 such “full line” stores over the last three years, leaving it with 254.

Its new target is to have a fully modernised core of about 180, in addition to its chain of food-only stores.

CEO Steve Rowe said that would be achieved by “rotating the estate” at 110 locations. About 35 full line stores will be relocated, about 45 will become food stores and about 30 sites will be exited over a ten year period, he told reporters after M&S published 2020-21 results.

“The market dynamics have changed and the effect of the pandemic means that we need to move faster,” Rowe said.

“The good news is that there has rarely been a better time to acquire new space.”

Rowe said M&S has 17 new or extended full line stores in planning, including six former Debenhams sites, in the next two years.

Debenhams collapsed in December, with its last stores closing earlier this month.

“We’re committed to stores and believe they could be a true source of competitive advantage, but they do need to be the right stores in the right location with the right services and they have to work with online,” added Rowe.

M&S estimated the cash costs of the programme at about 260 million pounds.