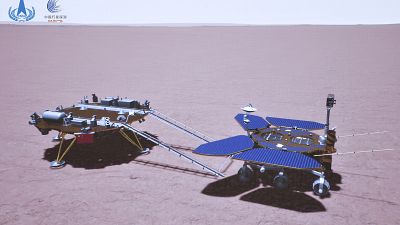 China's first Mars rover has driven down its landing platform to roam the on the surface of the red planet. Rover Zhurong, left its module for the first time on Saturday (May 22) morning.

China landed the spacecraft carrying the rover on Mars on May 15 in a technically challenging feat that is more difficult than a moon landing.

Zhurong, named after the Chinese god of fire, is the second rover to land on another planet, after the U.S rover Perseverance in February. Like the U.S. mission, it is searching for traces of life.

The Chinese mission will only last about 90 days not least because the equipment is solar-powered; unlike the American probes which have a plutonium-based nuclear power generator to provide them with abundant energy.

The lander carrying Zhurong from the Tianwen-1 mission touched down in the Utopia Planitia plain on the northern hemisphere of Mars.

The rover had already been running diagnostics tests for several days before beginning its exploration on Saturday.

Although this mission is primarily a technical demonstration, it also has a real scientific component. Zhurong carries six instruments, including one similar to the SuperCam on Perseverance.

Two instruments shoot a laser at a rock, vaporise it and analyse the gas created remotely to determine the composition of the rock.

The US has an ongoing Mars mission, with the Perseverance rover and a tiny helicopter exploring the planet. NASA expects the rover to collect its first sample in July for return to Earth as early as 2031.

China has ambitious space plans that include launching a crewed orbital station and landing a human on the moon. China in 2019 became the first country to land a space probe on the little-explored far side of the moon.

In December, China returned lunar rocks to Earth for the first time since the 1970s.