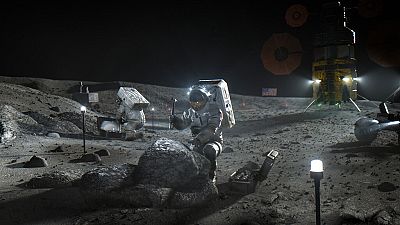 A NASA illustration of the upcoming Artemis mission, which the European Space Agency is supporting   -   Copyright  AP
By Hannah Somerville  •  Updated: 20/08/2021

The European Space Agency (ESA) has unveiled fresh plans to lay the groundwork for permanent human presence on the moon with a constellation of lunar satellites.

The ESA wants to build a new, satellite-powered telecoms and navigation system that all future missions to our closest celestial body could use.

More than a dozen European companies have signed contracts to draw up detailed plans.

In a statement on its website, ESA said a shared system would allow crafts to land regularly and wherever they wanted on the Moon, rather than preparing laboriously for one-off expeditions.

It would also make space exploration cheaper by making future spacecraft less complex to design, and lighter, freeing up more space onboard for scientific instruments or other cargo.

Alongside these benefits, the ESA added: "Radio astronomers could set up observatories on the far side of the Moon. Rovers could trundle across the lunar surface more speedily. It could even enable the teleoperation of rovers and other equipment from Earth".

It added that private companies could even make virtual reality games in which players "manipulate lunar robots or see through the eyes of astronauts".

Thursday’s announcement came months after NASA named its 18-strong team for the Artemis mission, which will see astronauts return to the Moon by 2024 in a spacecraft part-built in Germany.

The ESA indicated its system would be available to all nations with a space programme, including China, Russia, India, and the US.

But it also added: "Lowering the ticket price to lunar exploration could empower a wider group of ESA member states to launch their own national lunar missions.

"Even on a relatively low budget, an emerging space nation would be able to send a scientific mission to the Moon, inspiring the next generation of scientists and engineers".

Which European firms will help build the system?

The contracts were signed on behalf of ESA by its telecoms chief Elodie Viau. "A lasting link with the Moon enables sustainable space exploration for all our international partners," she said.

"Explorers will be able to navigate smoothly and to relay to Earth all the knowledge gained from these lunar missions".

Europe’s contribution to the Artemis mission

In December 2020, NASA announced the names of the 18 American astronauts it plans to include in the long-anticipated Artemis mission, which is set to put the first women on the Moon.

The journey to the lunar south pole will be the US space agency’s first crewed trip to the Moon since the end of the Apollo programme in 1972. It aims to set up a permanent base on the Moon: one of Donald Trump’s few signature initiatives that the Biden administration also supported.

The new generation of astronauts will travel in a spacecraft dubbed Orion while separately, NASA is working on a solar-powered mini-space station that will orbit the Moon and serve as a communication hub.

The ESA is building crucial parts of both at its facility in Bremen, Germany, including a habitat for astronauts on Gateway and the "European Service Module" for Orion, which will provide astronauts with water, air, electricity and temperature controls. As part of the deal, European astronauts will be able to fly on Orion in the future.