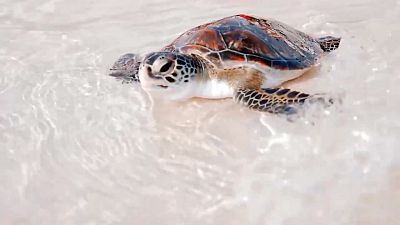 The Hawksbill turtle is native to the Middle East and listed as critically endangered with only an estimated 8000 nesting females left worldwide.

In Dubai, they can be found along kilometres of the city’s coastline which conservationists are keen to preserve.

Arabian Carpet sharks are another species that live in the water off the coast and protecting these breeds has become a team effort.

From animal sanctuaries to volunteers and community groups, Dubai is taking action to rescue, rehabilitate and maintain the native wildlife

The Turtle Sanctuary at Jumeirah Al Naseem hotel was set up in 2004 and so far, they've rescued 1900 sea turtles.

Tristan Delmas, Hotel Manager at the Burj Al Arab, said the aim is to return injured turtles back to the sea and provide long-term care for those who will never be capable of going back into the wild.

Diversity of sharks and stingrays

"So we care for them, some receive surgery, and after we put them into the lagoon, so they can get stronger before an official release," he said.

The turtles in this lagoon range from three to 100 years old and they receive lots of visitors, especially at feeding time. The sanctuary also runs an education programme for hotel guests, local schoolchildren and citizens.

Another hotel in Dubai pledging to make a difference is The Atlantis. One of their main attractions is the waterpark and Lost Chambers Aquarium. Within the aquarium they have an animal hospital as well as an active breeding programme.

Rob Bennett, Manager of the Lost Chambers Aquarium, explained that many people don't realise the diversity of sharks and stingrays that can be found in local waters.

Part of the breeding programme is to release sharks into the wild, about 40 kilometres away, at the Dubai Marine Reserve. Euronews helped release some of the three-year-old sharks that were in the hospital back into the ocean.

Kelly Timmins is the Director of Conservation & Education, and CSR at Atlantis. She told Euronews that the release area might look like a sandy beach at first, but it is full of mangroves and coral reefs.

"These Arabian carpet sharks, they like to hide in rocks and crevices. So it's important for us to release them into an area that they can be safe in and that they can find all these nooks and crannies to get that kind of shelter".

On the other side of the reserve is the newly opened Dubai Mangroves Forest. At the ceremony attended by the UAE's Minister for the Environment, 40 mangroves were planted with thousands more to follow. They hope this will be the biggest mangrove in the Middle East.

This abundant ecosystem includes coral reefs, mangroves, seagrass beds and a natural beach and is protected and maintained by the Emirate's Marine Environmental Group.

Major Ali Saqr Sultan Al Suweidi, the President of the Emirates Marine Environmental Group (EMEG) heads up a programme that invites local schools for field trips. One of its main goals is to teach and pass on key information about conservation to the next generation.