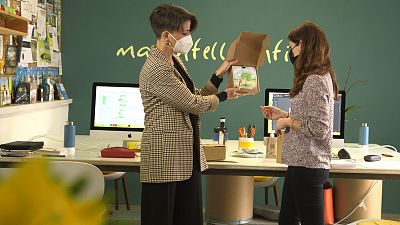 In this episode of Real Economy we ask what happens when job retention schemes come to an end in Europe? Job retention schemes have kept millions of people in work during the pandemic and lockdowns. As these emergency measures are gradually phased out, how does Europe ensure there are enough jobs and that people have the right skills for the jobs of the future?

The European Union’s goal emerging from the Pandemic is a ‘strong social Europe’. Its Pillar of Social Rights Action Plan sets out three targets to be achieved by 2030.

At least 78% of adults should be in employment and another 60% should participate in training every year. Also, the number of people at risk of poverty or social exclusion should be reduced by at least 15 million.

European Commissioner for Jobs and Social Rights, Nicolas Schmit, says that companies play a key role in training. "It's up to the companies to retrain, to reskill, to upskill a lot of their staff.

He adds that companies must "reskill those with the lowest level of skill because their jobs are also changing. There is now this idea that 90% of all jobs have some kind of digital component. If you are working in construction, for instance, you have to have some competencies in digital, how to manage when you are in the building area."

Schmit underlined that "the Commission wants to support these strategies at the level of the companies, at the level of regions together with public employment services"

The financial aid behind training and transitioning

The European Commission’s EASE (Providing Effective Active Support to Employment) recommends that countries create new jobs by supporting entrepreneurs and training people in new skills to get jobs in growing sectors such as green and digital.

To help finance this, there is money available from the Recovery Fund and the European Social Fund Plus.

"This is part of the withdrawal of the furlough schemes" says Schmit, adding "we need a new kind or very active labour market policy, and that's the sense of EASE. And we need it for these new transitions, which is also the green transition and the digital one.'

In Italy's Puglia region, two young entrepreneurs with innovative ideas have been given the chance to start a business with the help of the PIN project which is co-financed by the European Social Fund.

Giovanni is a mechanical engineer. He is just about to launch Adam’s Hand, a mobile bionic hand with an integrated AI system. He received 30 000€ and business support to create this high-tech start-up. He tells us that "the PIN project was fundamental" to his business because it allowed him to obtain the initial funds to purchase his first machines. It's what helped him create the first Adam’s Hand prototypes.

As well as financial and infrastructural support, the PIN project helped him bring back some qualified workers to the south. That, he says, is "a great source of satisfaction" to him and the team.

Nicolas Schmit believes that giving companies the opportunity to take on new employees, like Giovanni did, is also part of EASE's role when furlough schemes eventually come to an end. According to Schmit, it will help people "to take advantage of the transitions, to support them by skilling, but also in a way, by giving hiring subsidies, if needed, to encourage new companies or other companies just to hire people".

For now, Giovanni employs 20 people and has to keep ahead in a very competitive environment. His sights are also set on the international market which means it may grow in the near future and create further employment.

A fairer and more accessible labour market is one of the goals of the European Pillar of Social Rights, which also supports the green transition. This transition and the green sector, in general, are full of opportunities for Laura and her business partners. The three freelance architects returned to their Italian region to bring together agriculture and design.

The PIN project helped them create a company that designs ecological and reusable packaging. They were given help with management skills and the latest ways of working. Laura tells us that it's thanks to the PIN project and thanks to the new tools that it has allowed them to develop, they have been able to immediately talk to customers. This has helped them achieve many goals.

Today they have clients all over Italy.

With a total budget of around 17 million euros, the PIN project has funded more than 500 innovative projects like Giovanni’s and Laura's.

Training for a new era

Every year, the European Social Fund supports 10 million people like Giovanni and Laura.

According to economist Andrea Garnero, upskilling is key to this support. He says that "the kind of skills that will be required from workers and companies will change". They will need to rely more on technologies as working from home becomes more common. "Member states have played a key role in accompanying companies and workers in these transitions, and they need training, reskilling opportunities", he adds.

Europe’s commitment to Social Rights are at the forefront right now with the Social Summit being held in Porto in Portugal starting on the 7th of May. The two-day event will bring together EU leaders, institutions and social partners to discuss some of Europe's biggest challenges, like climate change and the digital transition. These two challenges in turn also affect business opportunities, job creations and training.

Nicolas Schmit says that the summit is coming at a time when "people are anxious, people fear that there will be cuts, there will be a big restructuring". According to him, the summit in itself is a message that the crisis will "not be a crisis of cuts in the social services and the social infrastructures". "We need economic development, but at the same time, we also need social dimensions and cohesion in our societies".

As job retention schemes come to an end, the hope is that Europe with its social initiatives and support will step up to the challenge and keep people in work.