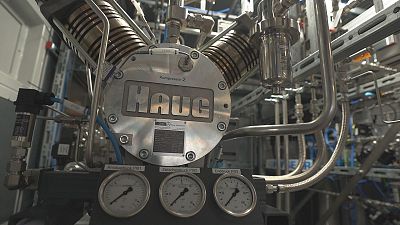 Business Planet looks at how one German firm's hydrogen technology could bridge the gap in the quest for clean energy.

For decades hydrogen has been touted as a fuel of the future. But despite its huge potential to decarbonise the economy, the element has never really lived up to its enormous promise.

German firm Hydrogenious, however, reckons hydrogen's day in the sun has finally arrived. The company says its tech can safely store, handle and transport hydrogen at low cost. That is important for so-called 'green' hydrogen - hydrogen made without fossil fuels - as it provides the means to link renewable energy production sites, like wind farms and solar power plants, to areas where the hydrogen is most needed.

“Our technology allows for the safe and efficient storage of hydrogen in a liquid carrier which is fully compatible with today’s infrastructure for liquid fuels. And, in terms of its potential, we really want to facilitate the large-scale implementation of green hydrogen infrastructure all over Europe, with a big target and vision to really decarbonise Europe, decarbonise mobility, decarbonise industry and therefore really contributing to our efforts against climate change,” says Daniel Teichmann, Hydrogenious' Founder & CEO.

Out of the blue: 'Green' hydrogen

Right now most of the hydrogen currently produced and consumed comes from fossil fuels, but it can also be made with renewable electricity by splitting water into hydrogen and oxygen using a process called electrolysis.

The EU has made it a top priority to create 13 times more clean hydrogen than today by 2024. By 2030, the goal is 130 times more - or 10 million tonnes. To help make that happen, the European Commission has set up the European Clean Hydrogen Alliance. Open to all public and private players, the Alliance seeks to mobilise investment by bringing government and industry together. Hydrogenious is already a member, as is SolarPower Europe.

We have the potential to build a robust industrial eco-system that will make Europe a world leader in clean hydrogen solutions.

Teichmann insists the EU's plans to develop a large-scale hydrogen eco-system is crucial.

“I believe that Europe’s role is hugely important. Hydrogen needs to be thought big. In my eyes its nothing that you could implement on a national level, and therefore I believe that also the funding mechanisms that are being put in place now by the European Union are exactly what is needed in order to make green hydrogen become a reality,” he says.

For now, Europe's clean hydrogen capacity is no where near where it needs to be if it's to match such lofty ambitions, but those working to make it happen insist it can be done.

“The core objective of the Alliance is to gather leading European businesses, from established market leaders to startups across the entire value chain, as well as policy-makers from member states. And, that’s to kick-start the hydrogen economy. We have the potential to build a robust industrial eco-system that will make Europe a world leader in clean hydrogen solutions,” insists Hemetsberger.

Helping to build the 'factories of the future'