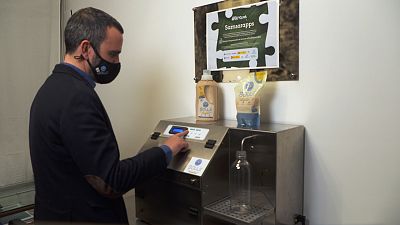 This week's edition of Real Economy focuses on going green, and more specifically, on Europe’s Green Deal and what that could mean for our jobs and the economy.

The EU has pledged to go carbon-neutral by 2050. But with the pandemic and its economic fallout, how do you tackle unemployment and climate change at the same time?

This is where the EU's ambitious Green Deal initiative really comes into play. Its goal is to make Europe the first climate-neutral continent by 2050. It also aims to transform Europe’s economy into a sustainable one, across the board from production to consumption. One of its key missions is to boost the efficient use of resources, minimise waste and cut greenhouse gas net emissions to zero.

However, this move towards a low-carbon society is likely to put more of a burden on regions, countries and industries that rely heavily on fossil fuels.

This investment is designed to help create new eco-friendly jobs, support educational opportunities and train people in new skills. With tens of thousands of projects across Europe, the ESF+ aims to give a helping hand to the EU's green goals and facilitating Europe's transition to a green and digital economy.

The EU believes the transition to a greener labour market is key to relaunching the economy.

Euronews reporter Fanny Gauret went to Madrid and Tenerife to take a look at two eco-businesses backed by the European Social Fund.

European programmes for a greener future

Empleaverde is a public programme that supports the creation of green jobs and entrepreneurship. It is co-financed by the European Social Fund and gives training and project guidance to sustainable companies.

Sergio and Catalina created Souji five years ago. Their small business developed a product that re-uses waste kitchen oil and turns it into soap.

What they do with the oil is ingenious. They mix it with equal amounts of their specially formulated product, souji, to convert it into soap. The soap can then be used to clean the frying pan where the oil came from, wash clothes or even clean floors. It's a perfect example of the circular economy at its best.

To get started, Sergio and Catalina required expert guidance which they received from Empleaverde. Sergio says the programme kept them on the right track and helped them with training and networking.

Souji has now designed a machine that can convert large amounts of oil. Their next step is to reach out to restaurants and hotels which generate large quantities of waste that they can use. Catalina says that when they break into that market, she expects their business to grow by 30-40%.

In Tenerife, the Spanish Basque start-up, Recircular, is also benefitting from Empleaverde’s support. It was created by Patricia. Recircular offers solutions to companies who want to give a new lease of life to all kinds of waste, including leather, plastic and even leftover grains from beer breweries.

Patricia, the co-founder, describes what they do as identifying "other opportunities, other options, that can add value, or can give a longer life to waste products".

Recircular effectively connects companies with one another and that is where Empleaverde’s network of green businesses has been helpful to them. Patricia says "they have also helped us with visibility, the visibility of our project, and on the impact we generate, they’re supporting us along the way".

Empleaverde is managed by Fundación Biodiversidad and has a budget of €47 million, 75% of which is co-funded by the European Social Fund. The programme selects and supports innovative companies, to help boost the green transition.

Elena Pita Domínguez is the Director at Fundación Biodiversidad. She says that "innovation is essential to this green transition, and the selection process is a key criteria because the challenges we face are very new, and so we need creativity to tackle them".

"In the aftermath of Covid 19, with the European Green Deal, then we will also create substantially new kinds of jobs"

Unemployment was already high in Spain. With the pandemic, it rose to 16% at the end of 2020. And for young people, unemployment now stands at 40%. Elena explains how they have boosted the help they offer to recruitment. "This type of assistance can be essential to producing a truly transformative change", she says.

But could public programmes like this, foster a green recovery of the economy and create jobs?

Euronews presenter, Naomi Lloyd, put the question to Connie Hedegaard, chair of the OECD’s Round Table on Sustainable Development. Here's what she had to say:

"Yes, for sure, and that's not just a fantasy, it's something that we have actually seen happening. It helps when public funds like the social fund or the EU structural funds, prioritise an area, then activities start to move into that area. It can really enable activity on the ground".

Are the two businesses we visited in Spain, that are transforming waste, creating the eco jobs of the future?

"Yes, I believe very much. We move from a linear way of thinking into a more circular way of thinking, and that means that we really have to think about waste differently. We have to reuse. We have to recycle. We have to use up. I think more and more people realise that. The good news is that for the companies, then it spells less costs if we can use materials much more efficiently. So, there are jobs to be had, but there are also better prospects for our economy to be had".

We're in the middle of a pandemic, is it really the right time to be taking the Green Deal forward?

"I think that the economic crisis that we see in the aftermath of the pandemic is a unique opportunity for us to rethink business as usual and to focus on innovation. We know that in the US, in China and elsewhere in the world, they are demanding more green products. We have a competitive edge today; we should use it even more. If we do that smartly, in the aftermath of Covid 19, with the European Green Deal, then we will also create substantially new kinds of jobs".

A climate Law to make the Green Deal a legal obligation is expected in the next few months. The challenge now is to seize this opportunity and help innovation and job creation as Europe moves towards that green, more sustainable economy.