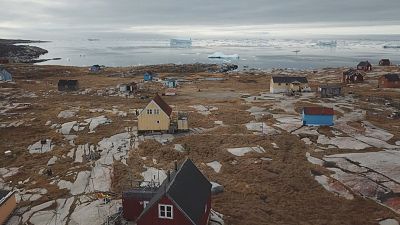 As part of Euronews' Green Tomorrow initiative, Futuris travelled to Norway and Greece to see how a European project is attempting to develop strategies to adapt to the worst effects of a warming world.

Rising global temperatures are not only altering the balance of nature but also human health. In a bid to address the climate crisis and some of the major challenges facing the world, the European Commission in July launched five flagship ''missions''. Nearly all the missions have an environmental focus. The include fighting cancer, building climate-neutral cities, protecting our oceans as well as soil health for food production.

Adaptation to climate change, including societal transformation is the other of the so-called five missions. To find out more, Futuris' Claudio Rosmino spoke to its head, Connie Hedegaard.

Connie Hedegaard: "No matter how much we do on mitigation in Europe, we will also have to adapt to climate change. And how will that impact our municipalities, our cities, our societies, our businesses, our homes? How could we make Europe a more resilient place? And how can we do it in a manner that benefits the economy, that is good for people, that is good for business. And where we also try to help each other a bit, shortcut to better solutions by cooperating, by working together and by sharing each other's data, among other things."

Claudio Rosmino, Euronews: "What is the strategic approach behind such an ambitious and wide-ranging plan?"

Connie Hedegaard: "This huge endeavor, you can sort of attack in many, many different ways. We have said, why don't we try to identify 200 regions in Europe, with very different challenges, with different experiences, different practises, some good, some not so good, that others could learn from what to do and maybe also what not to do, then we could identify where do we have some strengths, but also why are there some gaps knowledge wise, where we need, for instance, our scientists to come up with new solutions or our companies to come up with new technologies. And the other thing is we want to make 100 deep demonstration projects in 100 regions, where we really try to make new technology work to show how this could be done. And then, of course, the whole aim is that afterwards we should inspire each other. We should build on each other's experiences, instead of each of us reinventing the wheel."

One of the major challenges connected to climate change adaptation concerns our health. Rising temperatures increase the likelihood of heatwaves and wildfires and experts think that this climate effect combined with air pollution represents a major risk to human health.

Around 90% of the global population breathe polluted air. It is estimated air pollution causes 7,000,000 premature deaths worldwide every year.

In Norway and Greece, scientists from the EU-funded Exhaustion project are studying what impact rising temperatures and air pollution are having on medical conditions - for instance the link between heat, pollution and cardiopulmonary diseases.

In addition, scientists at the Center for International Climate Research based in Oslo (CICERO), are attempting to develop models that will lead to effective adaptation policies.

“Currently, air pollution is the largest killer in Europe when it comes to environmental stressers,'' explains Kristin Aunan, an Environmetal Chemist at CICERO. She adds: "The fact is that global warming can actually amplify the damage related to air pollution, and that can happen in many ways .One thing is that increasing temperatures can actually lead to increased emissions of air pollutants and increased concentrations."

The project is also examining the role different socio-economic conditions play in a changing climate. For example, how geographical or demographic factors of a location might affect the health of local populations. Studies already show a direct link between disease and rising temperatures.

“We have identified several factors that are associated with an increase from myocardial infarction, such as air pollution with carbon monoxide and sulphuric dioxide and nitric dioxide. And also the temperature. But what we do think is that the combination of those two, for example an elevated (carbon) monoxide together with the high temperature, that might be the worst case scenario,” says Stefan Agewall, a cardiologist at University Hospital Ullevaal in Oslo.

The Earth is around one degree warmer than pre-industrial levels. It means extreme weather events will be more likely in the future, even if governments stick to the two-degree global temperature rise that was agreed in Paris in 2015. Even this increase is expected to have significant repercussions for human health.

"We are still committed to a certain level of increase in heatwaves and they will impact us and it will not be what we were used to be before. I mean, someone has said that it will be different (compared to what we have had) . We have committed to a certain level of warming and heatwaves will be more frequent and more intense and that we will have impacts. And we need to be prepared for that," said Jana  Sillmann, CICERO's Research Director.

Climate change and where you live

Specific climate conditions in different parts of the world are also set to play a major role on public health. Elderly people, workers carrying out heavy physical labour in non-cooled environments and people with pre-existing medical conditions, such as cardiovascular disease and heart failure are expected to be particularly vulnerable to increasing temperatures. In this situation, the ability to adapt becomes crucial.

The Exhaustion project has access to retrospective health registries on the number of deaths and CPD (cumulative probability of death) in Northern, Central, and Southern Europe. In addition, it draws upon a large time-series data base in a multi-country observational study. Using the most updated climate models, the project's Greek team are examining how different populations might react when exposed to rising temperatures.

Klea Katsouyanni is a Professor of Biostatistics and Epidemiology at the National and Kapodistrian University of Athens: “We know that the lowest mortality temperature in the Mediterranean countries is about 29°C and in northern-central European countries is about 23°C. So, there is a difference, and the population react differently to specific temperatures. Also the 'cold effects' are higher in the Mediterranean countries, because the population is not adapted, and, I say again, the adaption does not need to be physiological adaptation, it can be behavioral adaptation. So we don't expect cold weather, we don't have the protective means to mitigate these effets.”

Another key question scientists in Oslo are trying to answer is how people might adapt, long term, to extreme heat events and a temperature rise of a few degrees. There findings could play a significant role in the development of social and urban adaptation strategies to limit deaths and disease in vulnerable groups.

"It's not likely that the quantitative relationship between heatstress and mortality, that we have had historically, will continue in the future, or at least we don't know that, insists Aunan, adding: "It could well be that societies adapt, as there are different adaptation measures you can think of: building greener cities, to avoid urban heat island effect, implementing alert systems etc. There are many things that can happen, that will actually reduce the vulnerability in European population, in the future."