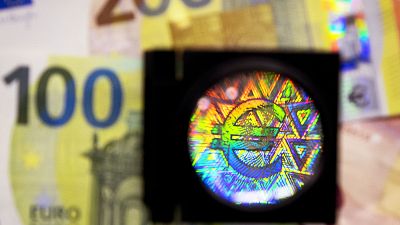 The European Central Bank (ECB) announced on Friday that it will start conducting experiments to decide whether to launch a digital euro.

In a report setting out the pros and cons of launching a digital euro, the ECB said that it "could support the Eurosystems objectives by providing citizens with a safe form of money in the fast-changing digital world."

Unlike private digital currencies like Bitcoin or Facebook's Libra, the digital euro would be a central bank liability and would complement the current offering of cash and wholesale central bank deposits. Its value would therefore not be volatile because it would be backed by the central bank.

The ECB stressed in its report that financial institutions and infrastructures are increasingly threatened by a wide array of tail risks as the proportion of payments services that are digitalized is increasing.

Cyberattacks, natural disasters and pandemics are flagged as potential risks because they can lead to outages of private card payment schemes, online banking and cash withdrawals from automated teller machines (ATMs) that could "significantly affect retail payments and erode trust in the financial system in general".

The digital euro would thus provide a "possible contingency mechanism for electronic payments that could remain in use even when private resolutions are not available," the report notes.

But the ECB also flagged that it could have a negative impact on financial stability.

"The euro belongs to Europeans and our mission is to be its guardian," said ECB President Christine Lagarde.

"Europeans are increasingly turning to digital in the ways in the ways they spend, save and invest. Our role is to secure trust in money. This means making sure the euro is fit for the digital age. We should be prepared to issue a digital euro, should the need arise," she added.

According to the central bank, some 79 per cent of all euro area payments at points of sale are still cash transactions, amounting to more than half of the total value of all payments.

The ECB aims to decide whether it should proceed with creating the digital euro by mid-2021.

Yves Mersch, a member of the executive board of the ECB, has backed the creation of a digital euro stressing earlier this year that money is a public good and that "it can only inspire trust and fulfil its key socioeconomic functions if it is backed by an independent but accountable public institution which itself enjoys public trust and is not faced with the inevitable conflicts of interests of private institutions."

He described Libra, Facebook's planned digital currency which is to be overseen by a 28-member organisation and backed by reserves of real-world assets, as "cartel-like".

He also emitted doubt over the fact it will be released "by the very same people who had to explain themselves in front of legislators in the United States and the European Union on the threats to our democracies from their handling of personal data on their social media platform."