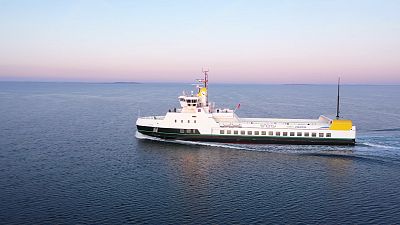 As Europe sets itself the goal of becoming the first climate-neutral continent, there will be changes to where we live, the food we eat and how we get around.

The “Green Deal”, launched by European Commission President Ursula von der Leyen in December 2019, set a target of 2050 to achieve its ambitions and will involve some radical and innovative projects.

Less waste, healthier food with fewer pesticides and fertilisers, better public transport alternatives and cleaner energy are just some of the plans being put forward.

In order to achieve climate neutrality the EU has to decarbonise the energy sector and help industry to be more innovative and become global green leaders.

Renovating buildings is among the priorities to help cut energy bills and energy use and the EU plans to roll out cleaner, cheaper and healthier forms of transport.

One of the success stories is an all-electric ferry that could transform maritime traffic. 750-tonne “Ellen” covers up to 22 nautical miles and connects two Danish islands.

In her home port on the Danish island of Ærø Ellen loads her passengers and recharges her batteries. Once charged, the ship leaves for one of its five daily trips to the neighbouring island.

This project was co-financed by the European Union in co-operation with islanders who are eager to achieve carbon neutrality.

E-Ferry project co-ordinator, Trine Heinemann, believes it is a good example for the whole of Europe.

“We’re fully-electric, so there is no oil on board at all to run anything on the ship,” she says.

Heinemann explains that a ship like Ellen faces the same challenges as electric cars when it comes to the distances it might travel but does not see that as a major problem.

“I think in Europe it's probably about 80 percent of the Ferry transportation that can actually be covered within a 22 nautical miles range so that's a lot of Ferry's you can change into battery electric."

Nearby a farm of wind turbines produces 130 percent of the electricity needed for Ærø. Some of the surplus power is used to charge Ellen’s batteries.

Ferries are currently the largest polluters on the island but Ellen will save 2,000 tonnes of CO2 emissions a year with her four quiet engines and 56 tonnes of lithium ion batteries producing up to 4.3 megawatt hours and no requirement for an oil-fired back-up generator.

Trine says: “At all times we reserve a certain amount of energy in each battery room. So, if you lose a battery room or have to shut it down for some reason there will always be enough energy left in the other room to sail back to harbor or do all the emergency procedures that could be involved in an emergency at sea.”

Upstairs there are all the comforts of a classic ferry and more. There is no noise or smell, which ensures a quiet crossing for passengers. And the crew have quickly became familiar with the new techonology.

“The only difference is we have two more screens with the power management system, whereas on a regular ferry you just have the fuel gauge. Actually, electric motors are more powerful because we have the full torque immediately from the bottom so that’s quite nice. You can almost drive it like a speed boat!"

An energy storage company in the Swiss lakes was chosen to power the ferry. Battery manufacturer, LeClanché, has developed several innovations to meet the requirements of the project in terms of safety and efficiency.

The company already has 25 orders for electric ships, some of which are larger than Ellen.

Anil Srivastava is the CEO of LeClanché.

“In Europe, we have taken the lead in electrification of marine vessels worldwide,” he says.

“The E-ferry project will give crucial operation data, safety data, will help set standards, not only for Europe but for the world.”

This is an example of how transport and mobility can change rapidly.

Building for the future

Another core objective of the Green Deal is building renovation. One project involves a construction in which smart windows become Solar Energy collectors.

Inside the windows is a continuous flow of a mixture of distilled water and glycol, which serves as antifreeze.

Using solar cells, the windows absorb solar radiation and turn it into thermal energy to heat the building’s interior.

Miglena Nikolaeva-Dimitrova is a physicist from the Bulgarian Academy of Sciences. She says: “The advantage of using liquids instead of air inside the glass is that water is more dense, so it absorbs infrared light in a broader range.”

Scientists at the European research project are using an experimental pavilion to test the system´s efficiency.

Temperature and humidity are constantly monitored inside the building to see if energy can be produced and used long-term or in very different climatic conditions.

"We measure the temperature inside the windows. We measure it every 20 centimetres, starting from the floor and then going up the window. This way we know how the heat is distributed inside every window. And so at the end, what we have is what we feed in to the window and what is getting out of the window."

The technology was developed in Madrid where scientists want the water-flow smart-glazing system to ensure energy efficiency, not just to act as a transparent insulator.

So the system must be able to maximise solar heat during the winter and avoid overheating in the summer.

“If the outside temperature is too cold, we can stop the water flow,” explains Juan Antonio Hernandez Ramos, Professor of Numerical Analyses and Computer Science at the Universidad Politécnica de Madrid.

“Transparent glass acts in active ways; it acts like a skin that allows the whole building to thermo-regulate itself.”

Scientists beleive the technology could help design the so-called "Nearly Zero Energy Buildings" of the future.

Researchers say the system's technology is now ready to be scaled up to industrial production.

Belén Morena Santamaria is an architect at the Universidad Politécnica de Madrid.

“The idea is to have buildings that reduce their energy demands as much as possible while, at the same time, producing thermal energy. This is our solution to improve and maximize the net balance of energy that every building needs,” says Belén.

These are just two examples among thousands of initiatives across Europe that are all moving in the same direction; creating better quality of life and moving towards the goal of climate-neutrality by 2050.

Romania moves away from coal towards new sustainable jobs