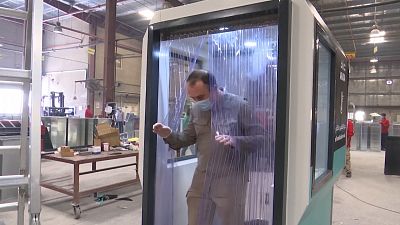 Even the most advanced nations on Earth have struggled to contain the spread of COVID-19. But as widespread lockdowns were enforced, the UAE began rolling out innovative technological solutions. In this episode, Sci-tech explores some of them: from flocks of drones disinfecting Dubai’s streets, to homegrown sanitising gates with features like instant temperature measurement, face mask detection, and 360° all-directional disinfection.

When and how can lockdown measures be safely eased? That’s a question every world leader has been grappling with over the past few months. Dubai, emerged from the strictest phase of its lockdown after just one month.

Having some of the highest per-capita levels of testing in the world certainly helped, and despite the privacy concerns that ‘big brother is watching’, so too did the early adoption of a bluetooth-powered track and trace app. Dubai’s response to the pandemic has been innovation-led, with autonomous machines becoming the norm.

The dash to develop ventilators

At the Dubai Future Foundation scientists are developing ventilators which they hope will be mass-produced cost-effectively.

Speaking to Euronews, Head of Dubai's Future labs Khalifa Alqama said: "In February, March, the whole world had less than one hundred thousand ventilators. And it was clear that we needed to see how we can help. And we thought we could give...building a prototype, a ventilator, a chance. We are aiming to ensure that we produce a ventilator that could be accessible and that has all the features of a fully fledged ventilator. That means, you know, give the doctors the control that they need when it comes to the volume of air that goes into the patient or the pressure that the patients need. A toddler would need very different pressure from an adult and the amount of oxygen that they receive from these ventilators.

"We are right now in the prototyping phase. We have around four that we are testing currently, internally. But in the future we're looking at producing them in the hundreds, at least for a stockpile and potentially for anybody who would need it as an export. But that will come after the verification and the standards, third party checks that will happen on these devices."

From the early stages of lockdown, Dubai deployed disinfecting drones to combat the virus in public spaces.

"We received a call from Dubai Municipality that they want to use the agriculture drones for disinfection," explained Pejman Ghorbani, Senior Product Manager at Advanced Media. "And so we came on board and we had them in stock. They can just make sure that the liquid goes everywhere because of the airflow that the propellers are making, because this is how they designed to just spread the liquids. The amount of liquid which is coming out from the nozzles are controllable. With the full tank and with a full battery charge can fly between 10 to 15 minutes. And you can cover, if I'm not wrong, you can cover an acre in an hour," he added.

Meanwhile, homegrown UAE company Guard Sanitizing Gate has developed a smart turnstyle that can instantly take temperatures, detect facemasks and envelope passersby in a fog of disinfectant created ultrasonically. For Husam Zammar, the co-founder of the company, these represent the ‘new normal’.

"There is a lot of changes happening in our life. You remember before, in all air flights you can smoke and the normal you can smoke, but now they stop. It's not allowed, and same what happened now, so the normal thing, tomorrow you will see, I mean in the next two or three months, you will find out that if they didn't check your temperature, there is some problem in this building or there is some problem in this organisation."

As businesses gradually continue to open and people begin to tentatively interact, Dubai mix of innovations, in the fields of medicine, mobile technology and sanitisation is seeking to keep the virus at bay.