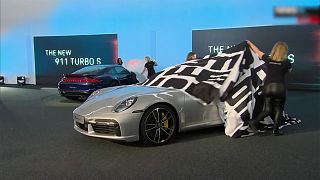 In the latest edition of Business Line, Euronews looks at how the coronavirus is impacting travel and tourism, what does it take to run a private and exclusive members’ business clubs in the heart of Dubai’s financial district and the cancellation of the Geneva Auto Show.

The travel industry and Covid-19

As news of the spread of the coronavirus continues to generate headlines across the world some analysts are forecasting that it could wipe as much as 2.4 trillion euros off the global economy. And apprehension is building among some travellers.

Following a string of travel bans including from Europes’ Schengen zone to the US; the closure of holy sites like Mecca and region-wide lockdowns all aimed at stemming the spread of the coronavirus COVID 19, travellers from pilgrims to package holidaymakers are unsure whether to cancel trips. And if they do, what refunds they’re entitled to.

"They've been very clear about certain destinations, certain parts of destinations where you simply should not go at the moment, it's very important that people follow that advice. Now if they booked on a package holiday the tour operator would not send them. Simple as that," says Sean Tipton - spokesmen for ABTA, the Association of British Travel Agents.

Tour operators are particularly hard hit as they bear the financial brunt of cancellations for certain major events and pilgrimages.

"If you're going on Hajj, believe it or not, it's defined legally as a package holiday and if a tour operator can't provide whatever it happens to be, in this case, the Hajj trip, they have to give the money back or let the person rearrange at a later time. So that will be covered. That's not good news for the tour operators, obviously, but those pilgrims don't have to worry about their money," says Tipton.

Travel advice changes as health authorities deem whether a country is considered risk category 1 or 2 and this will affect insurance policies.

"The overall advice is not to go to Category 1 countries because the risk is perceived as too high. If you choose to go to a category 2 country then there may be some risk, but that's partly your decision. Your insurer will also have a view on this, so some insurers will cancel or accept a cancellation and pay you your money. Others will not accept a cancellation. So then you're in a quandary because do you go to that country on the possibility that subsequently it gets labelled as category one," says Dr Charlie Easmon, a travel medicine specialist.

Medical professionals affirm that one of the best protection against the coronavirus is taking extra care with personal hygiene, It's also important to avoid unnecessary trips to crowded areas and remain up to date on which places are most affected.

The Capital Club has been ranked amongst the World’s top 10 most exclusive members’ clubs. Its General Manager, Ian Palmer has something of a reputation for helping big hospitality brands boost their profits.

But what does it take to run a club like this which counts some of the biggest business names as its members?

"Even as a young teenager I was working in hospitality and catering and putting up marquees and doing cocktail parties and the like. But I started washing pots at the Savoy in the banqueting department, then moved on to the administration of banqueting and then into room service and then into pretty much every single department in a five-star hotel, not just the Savoy but: Claridges, the Barclay, the Connaught and so on," says Palmer.

"So having an intimate knowledge of what you need to do in hospitality to be able to know what your costs are, you know, what type of people to employ in different departments, that's the knowledge base that is sort of set me up to be able to understand what we need to do to fix businesses as well as start them."

What's the key to success when running a private members club?

"Getting to know your clients first and foremost. Hospitality is about breaking bread, it's good food, good drinks, nice atmospheres, you know, understanding what people want. But if you don't get to know your client base and your guests intimately first before you go to market, then then you're going to have some problems," says Palmer.

What are the challenges associated with running an organization like this in the current economic climate?

"You're always going to be at the mercy of the economy and other people's businesses. I mean, we ARE going through it right now with Coronavirus and some of our clients, you know, by virtue of just keeping their staff healthy and making decisions like cancelling events of 20 people and over. So, of course, that has a knock-on effect with us. But what we have to do is react to that and then offer a safe environment for people to come and do their business because, you know, life goes on," says Palmer.

What unique business networking opportunities do you offer here?

"We're working with Microsoft at the moment to be able to understand our members even better and what their interests are and what kind of business introductions they want. And then our membership team actually make those introductions when they're relevant, of course. The DIFC recently ranked number eight in the financial global markets. Having the Capital Club here, it's an anchor for business. So we do attract a lot of the top business people," says Palmer.

In the past perhaps there’s been a perception that private members’ clubs were for the privileged few. Do you see that changing?

Dubai I think is going to be a fantastic city for private members clubs, It won't be just for the select few. You'll start to see people wanting to get involved with the sort of events and the content that clubs can bring together. So it's more to do with a community and a place to belong.

The cancellation of one of the motoring World’s biggest events,  the Geneva International Motor show this year didn’t stop car manufacturers from racing to unveil their 2020 offerings.

German giants from Audi and BMW to Porsche, Volkswagen, and Mercedes all did so in quick succession and also going ahead was the coveted car of the year prize.

Peugeot’s 208 hatchback was named car of the year at an empty convention centre after Coronavirus put the brakes on the Geneva Motor Show.

The ceremony which is usually staged in front of hundreds of journalists was live-streamed after the Swiss Government banned all public and private events involving more than 1000 people.

"The situation is not that easy and everybody is sad about the situation, but the decision of the federal government was clear and we had no choice, we had to cancel," says Olivier Rihs, Director of the Geneva International Motor Show:

Peugeot beat off competition from the BMW 1-Series, the Ford Puma, the Porsche Taycan, the Renault Clio, the Tesla Model 3 and the Toyota Corolla.

"I can tell you that we are very, very happy to be honoured by the Car of the Year. Truly it is a fantastic car and the jury is superb, so I can tell you that in the company it is a huge effect," says Jean-Philippe Imparato, executive VP, Peugeot brand.

Car manufacturers use the event as a launchpad for unveiling their latest models. Many opted to showcase via video press conferences and online announcements in light of the lockdown.

German carmaker BMW debuted its all-electric i4 concept – an all-electric, four-door gran coupe- that claims a range of 600 kilometres and an output of up to 530 horsepower.

Meanwhile, Porsche debuted its new 911 Turbo S. With around 650 horsepower it sprints from nought to 100 kilometres per hour in only 2.7 seconds.

Elsewhere sustainability was a key theme for brands and over at Mercedes-Benz, which hopes to become CO2 neutral over the next two decades, the latest E Class range and additions to its plug-in hybrids were rolled out.

"Our studies show that 90 per cent of your daily commutes, in general, are less than 50 kilometres. So your primary drive is emission-free. And that's really the purpose of this vehicle," says Markus Schafer, car development at Mercedes-Benz.