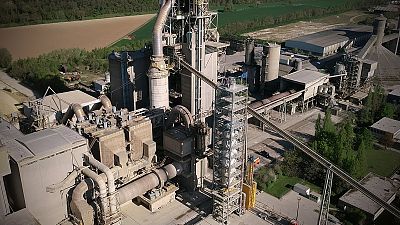 The cement industry is responsible for between 6 to 8 per cent of global carbon dioxide emissions.

Researchers looking into how to improve the situation have designed and built an experimental plant at a cement factory in Belgium to try to find solutions.

The factory, which covers around 70 hectares and employs around 180 workers, produces an estimated 1.4 million tonnes of 15 different varieties of cement from a common raw material: limestone.

But this comes with an environmental cost:

"If we produce one tonne of cement, we generate 0.6 tonnes of carbon dioxide. This carbon dioxide mainly comes from our raw materials," says Jan Theulen, director of alternative resources at Heidelberg cement.

Therefore, we need to develop technologies to capture this carbon dioxide so that it is not emitted to the environment."

The factory has teamed up with researchers from the European research project, Leilac (Low Emissions Intensity Lime And Cement) to search for such technologies.

The outcome is a 60-meter high plant with a pilot reactor that´'s already able to absorb 5 per cent of the factory´s total carbon dioxide emissions.

"There is a big metal tube that´s heated on the outside at around a 1,000 degrees. The raw material is dropped in the top and it falls slowly down. As this material gets heated, it releases its carbon dioxide. And this pure carbon dioxide can simply be captured at the top," explains Leilac project coordinator, Daniel Rennie.

But there are still different challenges that need to be addressed.

"The material has to be able to flow down the reactor. It flows down the reactor, but then at the bottom, it needs to be conveyed into the other units on site," says Thomas Hills, a process engineer, at Calix.

"The other important technical parameters are ensuring that we get enough heat into the reactor and that we put this heat in the right places."

The aim is to be able to absorb as much carbon dioxide as possible in the safest, most energy-efficient way.

Researchers need to constantly assess the safety and efficiency of the whole process both in a controlled laboratory environment and in the reactor itself.

"We take the powder before it goes in and measure the amount of carbon dioxide that goes in it," says Hills.

"Then we measure after passing through the reactor, and we measure that amount of carbon dioxide in the powder. And the difference is the amount that we capture."

Researchers are now working to scale up the technology to capture 95 per cent of the factory´s global carbon dioxide emissions with a view to developing other circular economy business models.

Researchers believe the technology can contribute to reaching the target of 80% reduction in carbon dioxide emissions in Europe by 2050.

Balancing urbanisation with quality of life and environment protection

How to increase biodiversity across cities