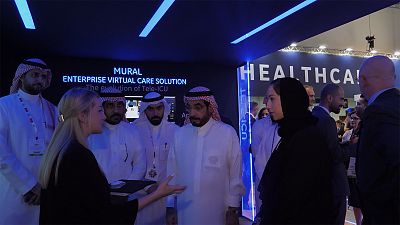 In the latest edition of Business Line, Euronews looks at the impact of Artificial Intelligence and Big Data on the healthcare sector, how the Covid-19 coronavirus is causing ripples on the Chinese stock market and the way India has plugged into the electric vehicle market.

The rapid spread of the Covid-19 coronavirus from the Chinese city of Wuhan to dozens of countries around the world has caused widespread global panic and sent ripples through the Chinese stock market. While scrambling to contain the spread and treat the ever-swelling numbers of infected, the authorities also moved to protect the economy and bolster business - a move welcomed by investors.

"We are watching and monitoring the situation very carefully," says Domenico Ferrini, chief investment officer with Investec Asset Management. "We are very happy that the authorities in China have taken every precaution they can. They've acted very swiftly."

Among a string of measures, the People's Bank of China injected billions of dollars of liquidity into the markets in mid-February.

But the authorities also faced criticism for travel bans and city-wide lockdowns dubbed ‘draconian’. Several government critics have been silenced or faced arrest. But major multinationals including L'Oreal and Toyota Boshoku quickly reopened plants in a mark of confidence at how China is dealing with the crisis.

A.I. and Big Data in healthcare

An unprecedented transformation is underway in the healthcare sector driven by Artificial Intelligence and Big Data. These two developments are having a positive effect on almost every operation from surgical to administrative.

Arab Health 2020, which takes place at the end of January in Dubai, is one of the top three healthcare shows in the world with delegates coming from Asia, Africa, the Middle East, Turkey and Eastern Europe to discover the latest in healthcare technonology.

Artificial intelligence seems to be on the tip of everyone’s tongue as it has the potential not only to save lives, but also, time, money and resources.

The investment currently being injected into Artificial Intelligence all over the world is reported to be around $6.6bn dollars. By 2026, these investments are expected to achieve an annual saving of $150bn a year.

General Electric Healthcare invests almost half of its research and development budget in digital and Artificial Intelligence.

"You can have a lot of data, but if you don't use it for a reason, then the data is a waste," says Elie Chaillot, president and CEO of Eastern Growth Markets at GE Healthcare. "A.I. is going to be much faster than the human brain to just take all these insights, put them together and make sure that we make something out of the data."

Indian car manufacturers are backing eco-friendly electric cars in a market where price sensitivity and lack of infrastructure has kept most buyers at bay.

The Indian government has set a deadline of 2023 for three-wheel vehicles to go electric with two-wheel scooters set to follow suit by 2025 which is good news for companies prepping for the switch.

But according to a report by independent rating agency ICRA Limited, only 3% to 5% of Indian passenger vehicles will be electric by 2025, because of high prices and an inadequate public charging infrastructure.

Rajeev Chaba, president and managing director of MG Motors India, says the move towards electric vehicles is a long-term process.

"It won't take off just like that, but it has to be one step at a time, one car at a time," he says. "And we are happy that with the ZS EV that we launched, we got 2,800 bookings in less than 27 days, without revealing the price, so that tells you that some consumers are ready and they're willing to experiment."