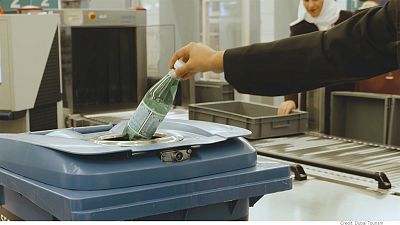 Dubai’s airports have banned all single use plastics as the city works towards a plastic-free future.

It comes as the attitude towards single use plastics is changing. In Dubai, 90 per cent of people say they are making a conscious effort to reduce their own plastic waste consumption.

Nearly four in five say they recycle more now than they did five years ago. And one in four people say they're encouraged to recycle more by corporations championing plastic-free initiatives.

Dubai International Airport along with Dubai World Central welcome almost 90 million passengers each year. But with those passengers comes 5,500 tonnes of plastic.

The airports’ operator, Dubai Airports, banned all single use plastics from inside the terminal at the beginning of this year.

That means that plastic cutlery, water bottles, drinking straws, packaging and polythene bags are all banned from cafes and restaurants.

Eugene Barry, Dubai Airports’ executive vice president (commercial), told Focus: “Ninety five per cent of our partners have actually made the pledge to switch from plastic to appropriate and relevant substitutes for some of the products that are used in catering and retail across the airport.”

The operator hopes it's a strategy that might become a template for other major transportation hubs and businesses.

“This is very much the early stages of a long journey, I believe, to have a more environmentally friendly approach to managing businesses,” Barry said.

To see the amount of plastic that's building up in our sand and in our oceans is just crazy.

Dubai’s 700 hotels are already looking at alternatives, such as switching water bottles from plastic to glass.

Plastic key cards could also be a thing of the past, as developers look into switching them to wood-based materials.

The eco packaging company Avani is one firm offering plastic-free alternatives, including a bag made from cassava, a cheap and common root vegetable.

The material is biodegradable and compostable, breaking down over a period of months on land or at sea.

Peter Avram, managing director of Avani Middle East, said: “Until a couple of years ago we had no major solutions, particularly for the bag.”

But the cassava bag, a mixture of starch, vegetable oil and organix resins, has changed the equation.

Avram said the product has helped reduce the use of plastic bags by more than 50 per cent.

Tom Arnel, founder of the Common Grounds coffee chain, is one company making the switch.

“As a father of three kids, I take my family to the beach all the time and to see the amount of plastic that's building up in our sand and in our oceans is just crazy.”

His company has phased out plastic cups and bowls.

“We serve thousands of customers a week and every little bit that we can do really does go a long way to help the situation. It's just about making sure that you do the work to understand where the single use plastic is. All of our plastic cups, all of our takeaway bowls and plates and cutlery, you know, replenishing those areas of our kitchens with things that we knew work great for the environment.”

Arnel said the feedback from customers had been “amazing”.

“As long as everyone's doing their bit and understanding their impact, we should be able to make a change together.”