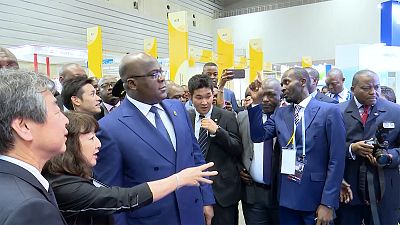 Their presence at the summit in Yokohama highlighted a shift in policy, as Tokyo changes its focus on Africa from aid to investment.

Japan has long been a player in international African development conferences and set up TICAD in 1993.

"So far, Africa has been the destination of financial assistance from us,” Yamada said. “Recently, Japanese investment and business aid inflows - in terms of exports - to Africa have become the focus of Japanese companies.”

Félix Tshisekedi, of the Democratic Republic of Congo, was one African leader attending - the first Congolese head of state to attend the TICAD summit.

And he made no secret of his reasons. He was in Japan to find support for his economic policy, holding bilateral meetings with his counterparts as well as leading members of the business community.

"Japan left good memories in the Democratic Republic of Congo and it continues to do so,” Tshisekedi told Africanews. “The fact that I have been received here shows the clear interest that Japan attaches to my country and I am proud of it.”

While Japan calls for more economic cooperation, ANAPI asks Tokyo to support the DRC on major infrastructure projects, such as the proposed hydroelectric dam on the Congo River at Inga Falls.

“I'm talking about the Great Inga, for example. We expect them to participate on the infrastructure issue. When the Japanese people start doing something, there is seriousness, there is longevity and there is an assurance that the product is fairly well made.”

Japan has also contributed to the international response to the Ebola crisis, helping to modernise the Biomedical Research Institute in Kinshasa.

The Japan International Cooperation Agency (JICA) is supporting the work of Professor Jean-Jacques Muyembe, winner of the Hideyo Noguchi Prize.

Professor Muyembe said: "A whole team from Japan has arrived to be able to prepare the other provinces that are adjacent to the regions that are currently affected: so we are preparing them in case the epidemic ever comes to these provinces, especially Tshopo province.”

Russia and Africa: working towards a win-win partnership