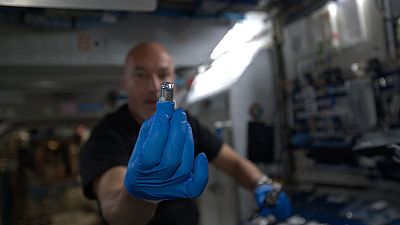 Euronews space correspondent and European Space Agency (ESA) astronaut Luca Parmitano has been in space for a month now. His first mission was to “catch a Dragon” – a cargo vehicle which brings payloads for astronauts onboard the International Space Station (ISS).

Once the dragon was “captured”, Luca and his team received new scientific equipment to start working on the experiments to be carried out during the Beyond mission. They have conducted several operations in the Columbus laboratory in orbit. Here are just a few...

The future of mining in space

The crew of astronauts is experimenting with bacteria that can use the ions in rocks to eat and create colonies, which would make it possible to develop mining in space in the future.

"Microbes are able to weather down a rock from which they can extract ions. This natural process enables bio-mining, where useful metals are extracted from rock ores", explains the ESA.

"They are already used on land, but we are trying to see how they behave in orbit so that in the future they can be used for mining on the Moon, or who knows, on an asteroid or Mars," said Parmitano.

A machine to print biological tissue in 3D

He also revealed that the team is doing experiments with a printer named a BioFabrication Facility, which is testing the ability to print biological tissues in 3D in orbit.

Although 3D bioprinting techniques have considerably improved on Earth, printing the tiny, complex structures found inside human organs, such as capillary structures, remains very difficult on Earth due to gravity. This experiment could, in the future, help to manufacture whole human organs in space.

"Being in microgravity helps those tissues to be not affected during printing by the gravity vector," Parmitano added.

In traditional 3D bioprinting, hydrogel is used to grow new tissue from existing patient cells. The complication arises when the temperature of the hydrogel increases during the culturing of the tissue as the viscosity, relatively low at ambient temperatures, rises considerably. This requires the creation of a scaffold or support structure to obtain a specific tissue shape. However, traditional scaffolds don’t support some small and complex shapes. It is here that microgravity can prove useful, as there is no need to create scaffolding structures to form complex tissue shapes.

As humans get older, altered amyloid protein structures in the brain can lead to neurological damage related to Alzheimer's disease.

In this experiment, Luca Parmitano studies the aggregation and behaviour of amyloid proteins to analyse the possibility that astronauts are more likely to develop this type of disease.

"Here on the special station we have the unique opportunity to study why this happens in orbit", said the astronaut.

Understanding how the human body behaves without gravity

The astronauts onboard the ISS are also collecting faecal, urine and blood samples to understand how the human body reacts to being in space, but also what changes occur over longer periods in orbit and before returning to Earth. This could help scientists to prepare for longer expeditions, allowing them to find new parts of the universe to explore.

Astronaut rocks Ibiza with first ever DJ set from Space!

Dragon catching at the ISS: Euronews space correspondent reports back