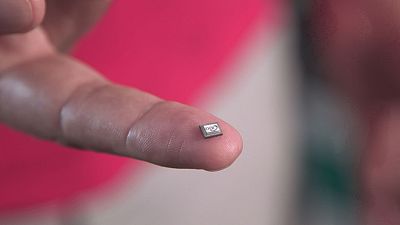 The era of the 'unhackable' phone may soon be upon us, as the random world of quantum physics is exploited to create the most secure chips ever seen.

The innovations we reveal in this episode of Futuris are being developed within the 1-billion euro EU's Quantum Flagship initiative, and promise a revolution in the privacy levels of our digital lives.

Quantum physics is the science of tiny particles behaving in unpredictable ways.

The concepts involved appear baffling - an object being two things at the same time, for example, or being teleported in the lab.

"Quantum means many things to many people, it's always the strange, the bizarre, if you're coming from outside of physics," admits Rob Thew, Physicist at the University of Geneva.

His definition? Quantum is "a single object, a single atom or a single photon, a single particle of light".

Scientists have now learned to control and manipulate those 'objects', which should lead to some spectacular new technology.

All computer security relies on random numbers, but conventional computing is not able to generate random numbers of the same purity as quantum objects, meaning that code-breaking hackers can predict outcomes and break down security barriers.

Not for long. Hugo Zbinden, Quantum Physicist at the University of Geneva, is leading a project called QRANGE aiming to make quantum random number generators smaller, faster and less expensive so that they can be easily integrated into everyday digital devices.

He shows us a minuscule chip, what he describes as "a quantum random number generator which generates millions of bits per second, and can be integrated into smartphones, and used in many applications."

The new chips make random numbers by firing a tiny laser at two targets. Nobody can say which target they'll hit.

"The chip itself may be, but it will be integrated into a more complex system, and you could still imagine that there are some problems in implementation. But the basics, the physics, is unhackable," Zbinden says.

In Barcelona, meanwhile, scientists are working on the next step, the quantum internet. At the ICFO Institute of Photonic Sciences, the team showed us a prototype of this new kind of web, where messages are sent via a few photons, and any attempt to intercept communication will always be detected.

The hardware to create the quantum internet is not yet robust, certified and compact enough to allow the technology to be deployed, and there are challenges in sending messages over very long distances.

However, the science of quantum key distribution, in which a quantum random number generated key is exchanged in order to unlock data shared in a traditional way, promises a great deal in terms of building a super-secure internet.

"Your data will be protected, for example, your financial, your health data. Also from a defence and security point of view, there will be a significant benefit, not to mention to secure power grids or transport grids," explains Valerio Pruneri, CiViQ Project Coordinator at ICFO/ICREA.

Businesses are being built around this emerging quantum technology as it moves from the lab to the marketplace, including Quside, founded by Quantum Flagship alumni Carlos Abellán. He says we should expect to see quantum random number generators everywhere:

That process of research, development, and deployment makes quantum tech a fast-moving field, according to Rob Thew: "Really being able to go into the lab one day, and make something at a quantum level function the way you want, and then put it in a box, and then take it to a potential client, and sell that box to someone that could perform some application that has a real impact on someone's life, I think it's rapidly progressing, and I think that potential that it has, and it's demonstrating at the moment, is one of the things that is very exciting," he says.

Watertight security is, of course, just one of the innovations coming from the Quantum Flagship, with other technologies like quantum computing also on the horizon.

The Quantum Flagship is coordinated by VDI Technologiezentrum GmbH in Dusseldorf, Germany.

What is ethical hacking and what is it doing for cybersecurity?