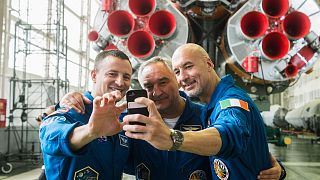 Astronauts are trained to think rationally, ready at any moment to respond to danger with a clear head and nerves of steel.

But behind the scientific facade, they are as superstitious as the rest of us, reveals European Space Agency Astronaut Luca Parmitano.

For example, there’s the strange ritual of the comfort break on the way to take off.

“It's a little awkward, but we all like to talk about it,” Parmitano says in his latest Space Chronicle for Euronews. “It has been there since the very first spaceflight. It's when, on the bus, going towards the rocket, about half a mile from the rocket, we all stop and step outside and we go to the right-back tyre of the bus that takes us to the launchpad. And we do a 'pit stop'.”

Fellow astronaut Drew Morgan adds: "That pit stop there on the tyre dates back to when Yuri Gagarin did it himself. And you know, there's a fine line between tradition and superstition, and because he had a successful flight, that became a tradition from that point forward."

Another preflight ritual at the Baikonur Cosmodrome in Kazakhstan takes places at the cosmonauts’ hotel.

“We get to sign the doors of the hotel where we are staying at,” says Parmitano.

And the astronauts also get to leave a greener trace for posterity.

“Right behind us there are some trees that have been planted by every single cosmonaut and astronaut that has flown on the Soyuz,” explains Parmitano.

"As a first-time flyer I got to plant my own tree,” adds Morgan. “And I even posted on Twitter a picture of my tree compared to Gagarin's tree, which is the biggest in the grove, of course."

The two men will shortly be taking off on a trip to the International Space Station.

You can follow Luca Parmitano's chronicles from space, in association with the European Space Agency, exclusively on Euronews.