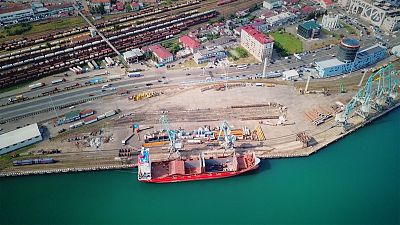 Batumi is the third largest city in Georgia and an important new commercial centre. Due to transportation of oil, Batumi's sea port has turned the city into a significant economic hub. Authorities are now trying to diversify activities in the port as part of an ambitious enlargement plan. They are now constructing a new terminal that will store up to 60,000 tonnes of mineral fertilizers.

Wondernet express, Trammo and the government of Georgia have joined forces to construct the new terminal which will cost just under 17.5 million euros. The multimodal terminal will handle mineral-based fertilizers coming from Central Asian countries to the Caspian Sea port of Baku, in Azerbaijan. From there they will be transported by rail to Batumi on Georgia's Black Sea coast.

The transport corridor is expected to become the shortest and most efficient route for products from Central Asia to the Black Sea. It could also enhance the geopolitical profile of the involved countries. From the Black Sea goods can easily get on to the European market.

Levan Gurgenidze, Deputy CEO of Batumi oil terminal was confident that the project would boost Georgia's position in global trade:

‘‘We are going to trans-ship through this terminal 1.2 million tones of fertilizers. This project will be the most tangible terminal which is going to connect east markets to western countries. It will enhance the country's reputation (you may say Georgia’s reputation) to become the global hub for the transportation of these types of specific goods’’.

Batumi is the capital of Georgia's autonomous republic of Adjara. The project is likely to add to the local and regional economy because it will create at least 100 new jobs. The Chairman of the Government of Adjara was optimistic about it:

‘‘The new port facility is intended to be a gateway for the Caspian Sea and the Black Sea. I’m confident that it will create new possibilities for connecting Europe and Asia. This will be an important milestone for the local economy in terms of creating job opportunities’’.

Authorities argue the project will comply with international environmental standards and regulations.

The new terminal is expected to be operational by the summer of 2020.