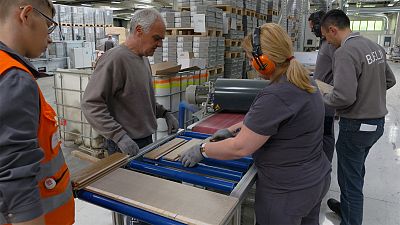 This is one of the 20 principles of the European Pillar of Social Rights - the set of principles that help improve working and living conditions in the EU.

Its aim is to tackle a dangerous and expensive issue - occupational ill-health.

Work-related ill-health and injury are estimated by the European Agency for Safety and Health at Work (EU-OSHA) to cost the EU about 476 billion euro a year (2017 figures), or around 3.3% of EU GDP.

The direct costs of exposure to carcinogens at work across Europe are estimated at €2.4 billion per year.

But what is the extent of the problem? And what has the EU done to try solving it?

The biggest threat of death at work: cancer

One of the biggest health problems which face workplaces across Europe and indeed the world is cancer.

There are clear indications that limiting exposure to carcinogenic substances can reduce the risk of cancer. This basic fact has huge implications over time - for the 40 million workers in the EU, many will work around carcinogens so reducing this exposure could affect the life expectancy of several of them in a positive way.

These are listed in a directive that employers must abide by. They are required to reduce their employees' exposure to these substances while also educating them on the risks involved. This affects businesses across the EU.

One example of this taking effect is in Europe's lumber industry. Wood dust, when inhaled can cause irritation as well as skin and respiratory diseases. In cases of prolonged exposure, it can cause cancer. With 3 million workers being exposed to this substance across the EU, it's carcinogenic effect could affect a great deal of people.

Euronews spoke to a lumber factory manager, Kruno Piškur, in Croatia about the precautions the firm has taken:

"We made modification on the exhaust system. We invested also into the ventilation system, so we have separated filters with bags that are collecting this small saw dust and then the particles are being collected and then transported the larger silos. Now we see what we can more improve what substances we can reduce to the absolute minimum because a safer and satisfied worker is a good worker."

The International Agency for Research on Cancer evaluates suspected carcinogenic agents. They have identified 120 materials that have known carcinogenicity with 70 of them being used in the workplace.

Has the EU solved the problem?

11% of surveyed workers declared to be exposed to vapours from solvents; 15% to smoke, fumes, powder and dust, and 17% to chemical products for at least a quarter of their working time according to a survey by the European Agency for Safety and Health at Work.

European employers must declare carcinogens they use and the number of workers exposed to them. But a spokesperson from the Union of Autonomous Trade Unions of Croatia said the directive is not enforced enough.

"Since there are no sanctions for failing to fulfil that obligation, not all employers report this in Croatia. What we need is a better oversight of whether regulations are applied."

Christa Sedlatschek, director of EU-OSHA, identified the sectors that have high exposure to carcinogens: welding, construction due to asbestos and silica dust, as well as nursing and hairdressing.

She added that larger companies comply with the regulation because they "have a more systematic approach to occupational safety and health whereas micro and small enterprises do not."

"We, EU-OSHA have developed one tool, it is an online interactive risk assessment tool called OiRA, which provides assistance to micro and small enterprises. It is web-based, it's without any costs, easy access and, of course, you get that by using this tool, a very good risk assessment."