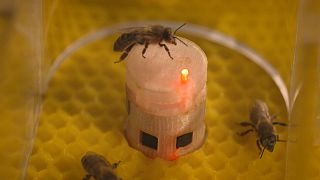 Can bees learn how to communicate with robots? Can robots learn how to interact with bees? Believe it or not, it's by answering these questions that European scientists think they can develop new technologies aimed, amongst other things, at better protecting the environment.

Almost every day, researchers in Graz, Austria build beehives like no other. Wax panels are installed above a fleet of small robots equipped with sensors. Complex bio-inspired algorithms help these robots send different physical stimuli to the insects.

Researchers then study the reaction of the bees.

Scientists at this European research project have programmed the small robots to try to make bees respond to stimuli such as vibrations, changes in air flows and, especially, variations in temperature.

"We have electronic parts inside the robots. We are able to warm these under certain temperatures. This is the method we use to warm up the robots. We warm them so that the bees are attracted to these warm points," says Ziad Salem, a systems engineer at the University of Graz.

The next step is to program robots to autonomously mimic the social behaviour learnt during their exchanges with bees. Scientists basically want robots to develop an autonomous collective swarm intelligence.

"In temperature fields like the ones prevalent inside beehives, a single honey bee very often does not find the spot on her own where she needs to do the job. But if we have more bees working on the task, then they are successful because they work in a community. We try to reproduce in robots this example of collective swarm intelligence," says Martin Stefanec, a biologist at the University of Graz.

Scientists hope their small robots could one day help to protect bees, currently under heavy environmental pressures. They see a future where tiny, sensor-equipped robots could live inside beehives and exchange environmental data with the bees, such as information on the presence of pesticides or pollutants in the immediate environment.

The wellbeing, protection and productivity of bee colonies could greatly improve, researchers say.

"Lets suppose we have a long period of rain coming up in summer, or cold weather, which might mean that bees don't have enough to eat. If we could know that in advance from the robots, we could, for example, regulate the queen to lay fewer eggs and have fewer offspring so that the offspring that are already there can be taken care of in a better way before there is cannibalism," says biologist Martina Szopek.

Similar research is currently under way on fish species. Other than environmental protection, scientists hope their work will have an impact on fishing and livestock management, as well as on agriculture.