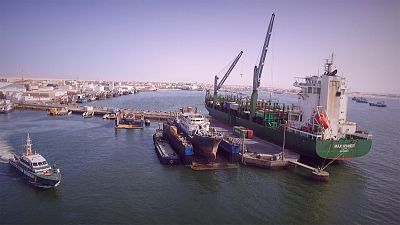 Blessed with rich minerals and waters brimming with fish, Mauritania is awash with natural resources worth their weight in gold. But the West African country also knows how to diversify its resources by investing in renewable energy. Mauritania, and its economic power arising from water, land and sky, is what this Focus segment is about, on Euronews and euronews.com.

With just four million inhabitants but twice the size of France, the West African country is counting on its natural wealth to boost growth. Natural wealth hidden in desert lands and in the Atlantic Ocean.

​Between 2008 and 2014, Mauritania experienced an economic boom thanks to its mines of iron, gold and copper, which represent 54% of exports, while its annual iron sales have gone up to 12 million tonnes. The country, however, suffered through a spectacular fall in the price of minerals in 2014.

Mauritania is also prolific in fishing, which represents 45% of the country's exports.

​The country's waters are where its treasures abound making it one of the richest countries around the world in fishing resources. Along its 700-kilometer coastline, scientists have identified close to 600 fish species, while more than 200 can be marketed.

Spain is the top destination of Mauritanian fish exports.

At the port of Nouhadibou, the economic capital of the country, only one third of fish are unloaded, however, because of a lack of infrastructure. One of the major projects of the Free Zone, which has attracted investors since 2013 thanks to an attractive tax regime, is to create a new deep-sea port of up to 18 meters capacity in order to accommodate larger vessels.

"It is going to be the most important [port] in West Africa," Mohamed Ould Daf, the head of the Free Zone, told Eurozone, adding "This port will offer all the technical conditions for the domestication of this fishery resource, and beyond; it is also a commercial port because it is the port of the big Sahara, it is a port which will allow countries that have no access to the sea to benefit from an extremely important exchange and transit platform."

Euronews also traveled to Nouakchott, the country's capital, to discover the other side of the Mauritanian economy - renewable energy; that is wind and solar. ​At the gates of Nouakchott, 15 wind turbines churn the wind coming from the ocean, while impressive solar plant investments also bring clean energy.

En route to the capital is Chami, a new city, created in 2012, which runs exclusively on solar energy. A solar field there is responsible for providing electricity to 5,000 inhabitants, and the creation of the city is an example of the accelerated pace of the country's development.

"We gained our independence in 1960, and at that time there was absolutely no infrastructure, which is why Mauritania during all these years has relied on the export sector - iron and fishing" Mauritania's Central Bank Governor Abdel Aziz Ould Dahi told Euronews, adding "Authorities have in a few years managed to put in place a relatively interesting infrastructure, which offers prospects for the diversification of the economy and is the most important stake for the coming years."

​In 2008, Mauritania did not use any renewable energy whatsoever. Today, public funds finance the sector entirely. The country has been the best 'student' in the world in terms of the allocation of resources for clean energy. The planned 100 MW wind power plant in Boulenouar will become - when finished in 2019 - the largest in West Africa. In 2016, 38% of the energy produced came from renewable energy. Mauritania hopes to reach 50% thanks also to a 50 MW photo-voltaic plant with 157,000 solar panels, in Nouakchott.

"The needs of the country amount to 120 MW, and we have three times that in terms of power that allows us to export the surplus electricity to our neighbors Senegal and Mali." Dahane Taleb Ethmane, press officer at SOMELEC, the state electric company, told Euronews.

Mauritania, a former nomadic country, is moving forwards as evidenced in its leap by 10 places to 150th rank out of 190 countries, in the World Bank's Doing Business 2018 index, its third consecutive gain in the rankings.