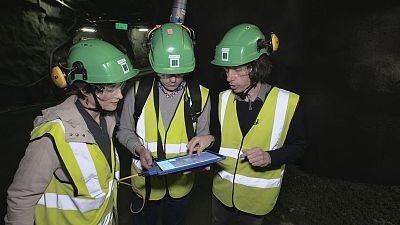 You wear it like a simple backpack but it is crammed with technology!

An innovative 3D scanner has been designed to inspect an unusual underground site - a nuclear waste storage facility in Finland.

'Futuris' reporter Anne Devineaux visited the Onkalo site where spent fuel from Finnish nuclear power plants will be stored in the future.

Still under construction, it is a labyrinth of tunnels, several kilometres long, dug into the granite at a depth of 450 metres. As a nuclear site, it will be inspected regularly to ensure adherence to European safeguards agreements.

European researchers have developed a new 3D mapping scanner to facilitate this work.

"The main innovation of this system is that we manage to obtain a model, a map, in real time," explained Vitor Sequeira, Project Leader of Innovative Safeguards R&D at the European Commission's research centre (JRC).

"It also provides us with the location where there is no GPS signal and we see in real time the differences between a reference model and the current model."

Therefore any changes in the structure and design of the site can be detected.

It is a working basis for European Commission inspectors and the International Atomic Energy Agency to verify information provided by the nuclear installation's operator, Posiva.

"These are quite large underground areas we are constructing, so you need effective technologies to do the inspections quickly and effectively," said Posiva's Nuclear Safety Manager, Mari Lahti.

"We have been helping to develop these inspection techniques. We have provided our site to be the kind of test area, also."

Undeclared structural changes would appear in red on the screen, as scientists demonstrated to 'Futuris' from experimental data - on the basis of mapping made several years ago, used as a reference model.

"It is very clear that the tunnel we can see here did not exist on the reference model," Vítor Sequeira said. "Another thing that did not exist, as you can see in red on the screen, is this door."

The technology was developed at Europe's JRC (Joint Research Centre), in Ispra, Italy. That is where the first prototype was assembled and it is also there that inspectors go to familiarise themselves with this new tool. While it is easy to use, its design has faced significant technical challenges.

"What is most complicated is the fact that we are working with data that we acquire while we are in motion which means we need to have very fast sensors," said Carlos Sánchez Belenguer, AI and Robotics researcher at the JRC.

This type of scanner has begun to be marketed but research continues to further improve the system's performance, particularly when it comes to localisation.

"In the future, using artificial intelligence techniques, we want the system to be able to locate itself automatically, without references."

Besides nuclear inspections, many other applications are envisaged in the industrial sector but also in the preservation of cultural heritage.

AI is coming to a workplace near you