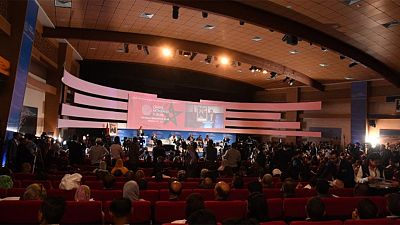 The 2018 edition kicked off on Friday, March 16, bringing together more than 1,000 participants, representing more than 100 countries, around various themes such as food security, sustainable agriculture, public health and renewable energies.

“We are very happy to find the big African family in Morocco for very animated reflections, a sharing of experience, a sharing of vision,” said the forum’s president Pierre-Emmanuel Quirin. “We offer a free platform to be able to create this exchange of experiences on themes such as agriculture, fishing potential, renewable energies, responsible eco-tourism. I think that somehow the city of Dakhla — at least for a few days — has become the capital of the continent.”

For the first time since the relocation of the Crans Montana Forum to the city of Dakhla in 2015, a Moroccan head of government took part in this important event for the African continent. Euronews spoke to Moroccan Prime Minister Saadeddine El Othmani:

The South African Zulu King Goodwill Zwelithini was among the most important guests of this edition, engaging with policymakers and experts on topics such as agriculture, health, poverty alleviation and youth migration. “There is a lot of poverty [in Africa].Something that is painful to me is to see so many people… migrating to other countries,” he told Euronews. “It’s painful to see our people running away from where they belong.”

The Deputy Minister of Home Affairs of Zambia Grace Njapau spoke about the role of women by highlighting women’s leadership: “Men try to marginalize women but we are saying no, we are above that now, as women we need to come together. We need to exactly know what we want to do and we must know who we are. We are women that can change the world, that can change Africa.”

This year 49 African countries were present to discuss the future of Africa. One of the key topics of the event was urban development – a challenge for the African continent.

“Development is first and foremost a question of mentality,” said Souleymane Fall, special advisor to Senegalese President Macky Sall. “Africans are convinced that our continent — with all the riches it overflows — can become a leader in the world. It will be with this conviction, with this winning spirit and especially with our unity.”

This year it was former Haitian President Michel Martelly who received the event’s Foundation Award, a prize given to notable actors of Peace, Freedom and Democracy. “Haiti is Africa, we have Africa in our blood. We are Africa in our skin, in our culture,” said Martelly. “We are the African diaspora, we are the children of Africa, so we belong to the world. In fact, we should already belong to the African Union.”

After two days of exchange and sharing the forum closed its first part in Dakhla. The second part of the event was held aboard the Rhapsody, the prestigious Italian cruise ship, during a cruise to Casablanca.