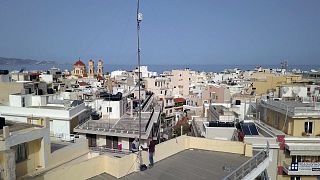 Our cities are getting hotter and hotter. Buildings, air conditioning systems, traffic and industrial activities release heat that changes the energy balance of urban areas, affecting the environment and the health of citizens.

How can we make cities more eco-sustainable? This is the answer that the URBANFLUXES project is looking for.

Getting our cities more suitable for urban living at a time of climate change is crucial.

UN forecasts say that, by 2050, around 70% of the world’s population will be living in urban areas. This highlights the importance of managing urban-made heat fluxes.

“The URBANFLUXES project is important because for the first time, using satellite data, we are able to estimate the energy balance and its time distribution,” said Nektarious Chrysoulakis,Project Coordinator, UrbanFluxes
Physicist, FORTH.

“We can also accurately estimate, on a local scale, highly concentrated heat spots and high emissions of anthropogenic heat.”

Several environmental monitoring stations have been installed in several hotspot on the Greek island of Crete.

“From this system, we receive data in our laboratory over the internet; we can get the different (heat) fluxes in the city in real time, then we compare them with the satellite data and we produce an global evaluation,” said Stavros Stagakis, Biologist, FORTH (Foundation for Research and Technology)

Remote sensing data systems have been also tested in the highly urbanized cities, such as London and Basel. They collect meteorological data, such as air speed, wind direction, air temperature and rate of humidity.

URBANFLUXES investigates in depth the cities’ warming by combining in-situ meteorological measurements with imagery from some of the Earth Observation satellites working within the Copernicus Program.

The rate of warming in cities is higher than the average global warming and, especially during heat waves, this may significantly influence human mortality.

This methodology is expected to be easily transferable to any city.

By taking into account these studies, local communities may be able to support sustainable urban development strategies focused to reduce climate change.