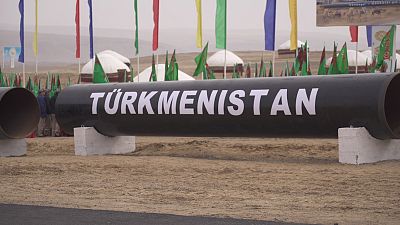 <p>The leaders of Turkmenistan, Afghanistan and Pakistan celebrated with the foreign minister of India the completion of the Turkmen section of the <a href="http://www.euronews.com/2015/12/17/tapi-a-pipeline-for-peace-and-stability">trans-Afghanistan pipeline</a> which will transport natural gas from Turkmenistan to Afghanistan, Pakistan and India.</p> <p>“From 2015, we have done a lot of work in order to reach the current phase of the project,” explained Muhammetmyrat Amanov, <span class="caps">CEO</span> of the <span class="caps">TAPI</span> Pipeline Company.</p> <p>“We have concluded our work in Turkmenistan and we now move to Afghanistan. We plan to finish the job and put gas in the pipeline towards the end of 2019.”</p> <p><em>Related reading:</em> <a href="http://www.euronews.com/2015/12/17/tapi-a-pipeline-for-peace-and-stability"><span class="caps">TAPI</span>: a pipeline for peace and stability</a></p> <p>Terrorist attacks in Afghanistan are of great concern to everyone involved in the project. The Taliban have declared that they wish to destroy the pipeline. </p> <p>Afghan authorities say all necessary measures have been taken. </p> <p>“Afghanistan is of course a country which has high risk of security, but in the mean time, we have full preparation from the governments’ side for protecting <span class="caps">TAPI</span>,” said the acting minister of mines and petroleum of Afghanistan, Nargis Nehan.</p> <p>“We are aware of the risk, but you also understand that <span class="caps">TAPI</span> is such an important project, that not only the government of Afghanistan, but also the people will do whatever they can to protect the pipeline.”</p> <p>The pipeline will run more than 1,800 km to the Fazilka Village on the Indo-Pakistani border. </p> <p>It will provide Afghanistan with 14 million standard cubic metres per day of natural gas, while India and Pakistan will each receive close to 40 million standard cubic metres. </p> <p>Turkmenistan always had large gas fields, but its transfer to other countries proved difficult. <span class="caps">TAPI</span> strengthens the economy of central Asia, opens up new fields of cooperation, while it boosts the energy sufficiency of the four countries involved in the project.</p> <p>“Afghanistan needs economic stability in order to create political stability,” said the Emirati economy minister, Sultan Bin Saeed Al Mansoori.</p> <p>“People there, need to create revenue and income, industries, businesses. This pipeline is going to satisfy these needs of Afghanistan. Eventually this is also moving to Pakistan, moving into India. The connection of the four countries, you will also see an exchange of knowledge, know how, investments between all these nations.”</p> <p>The importance of the <span class="caps">TAPI</span> pipeline was underlined by the presence of many government representatives from the wider region.</p> <p>They all highlight the fundamental role of the pipeline for the future prosperity of the four nations.</p> <blockquote class="twitter-tweet" data-lang="en"><p lang="en" dir="ltr">My ED in our today's paper: Trans-Afghanistan pipeline, a ray of hope<a href="https://t.co/I9eIJN6c4d">https://t.co/I9eIJN6c4d</a></p>— Mansoor Faizy (@Mansoorfaizy001) <a href="https://twitter.com/Mansoorfaizy001/status/966558832423063552?ref_src=twsrc%5Etfw">February 22, 2018</a></blockquote> <script async src="https://platform.twitter.com/widgets.js" charset="utf-8"></script>