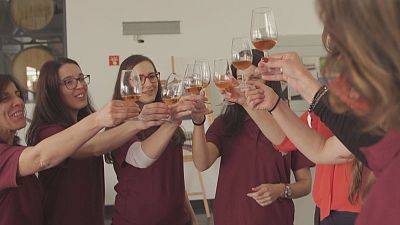 This week, Business Planet travelled to Madeira to discuss export development. Only a few small businesses in Europe export their products or services beyond the EU. But studies show that international SMEs create more jobs and are more innovative than SMEs which only sell in their home country.

“We did some market research and we saw that there was room for the production and trade of an exceptional Madeira wine. We placed a subtle emphasis on the women of Madeira in order to attract a young and female audience.”

For Madeira Vintners, going international was a crucial part of its business. The all-female team produces Madeira wine with a lower alcohol content (17%). Their aim is to attract women from all around the world and sell their high quality product globally.

The company is Madeira’s youngest wine brand and the first to be founded on the island in 80 years.

In a market dominated by men, Suzanne Pedro, Madeira Vintners CEO says: “The innovation comes from the team behind the project – which is exclusively women. There is also a lower amount of alcohol. The grapes are selected by hand and different varieties grown on the Porto Santo island are incorporated.”

To be classified as “Madeira”, the wine must age at least three years. The first vintage was marketed in 2016. Thanks to the Funchal cooperative’s network, it was an immediate success.

“Our sales doubled between 2016 and 2017, mainly thanks to high demand in the US. This year, we’re going to market our first wine, aged 5 years. It will be launched on the 8th March, women’s day,” Pedro says.

The initiative received two-thirds of its funding from Europe. It created six jobs and gave new sales opportunities to local winegrowers. The venture was also shortlisted for the final of the European Enterprise Promotion Awards, in the international category.

José António De Coito Pita, the President of Funchal’s Agricultural Cooperative, says the project should act as an inspiration to other SMEs looking to conquer the international market.

“If you have a good project, a good team and if you believe in it, if you’re supported by local and national institutions, if you master social networks, anything is possible. To succeed, you need to believe you are the best!”