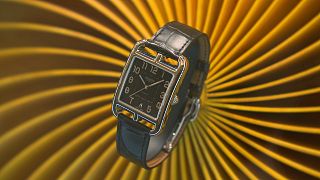 Every year, the Salon International de la Haute Horlogerie (SIHH) brings together dozens of the world’s finest watch-making brands in the Swiss city of Geneva.

"You may carry a smartwatch during the day for practical reasons and later want to feel elegant, have a kind of intimate bond with your object, or just feel good about yourself. I believe in the comfort and elegance that a fine watch brings today so I think there is room for both and I'm not particularly worried."

Now in its 28th edition, the event prides itself with spotting the trends to look out for in the year ahead.

Luxury watches continue to be mostly made here in Switzerland, and the industry is emerging from a recent slump with renewed confidence.

“For two years, we had been experiencing somewhat of a slowdown. But 2017 ended with growth of 3 to 3.5 percent for Swiss watch exports, and 2018 should stick to that trend,” said SIHH Director Fabienne Lupo.

#TubaBuyukustun posing in front of the #IWC150 special time machine at #SIHH2018 to celebrate the new #IWCSIHH collection pic.twitter.com/jbVtC2gzsH

This year also marks the 150th anniversary of IWC Schaffhausen. To celebrate, the Swiss-American brand set up an almost theatrical scene including something of a time machine and a real watchmaker.

“Our story started with an American watchmaker and engineer travelling from Boston to Switzerland to combine the craftsmanship of Switzerland with the American industrial technology,” said CEO Christoph Grainger-Herr. “The centerpiece here is a time machine that really connects all the different ages and stories of IWC and puts the watchmaker family at the centre of that.”

The list of brands on display has been enriched by La Montre Hermès. It joined the event for the first time, having defected from Baselworld, a popular watch fair in Basel.

“Joining the closed circle of the Salon de la Haute Horlogerie is for us a real achievement and recognition of everything Hermès has done to develop its savoir-faire, move upmarket and effectively set up an entire manufacturing hub in Switzerland that now employs 300 people,” said Laurent Dordet, CEO of La Montre Hermès.

It’s not all about function

The past few years have not been great for the luxury watch market, amid a slowdown in emerging economies like China. But high-end products are proving resilient – even in the era of smart watches packed with electronics.

“Functionality is no longer the prime goal. There are obviously plenty of ways to tell time, to read time and we don’t necessarily need to wear a watch for that. So what more traditional watchmaking can bring is pleasure, emotion – something that goes beyond function,” said Nicolas Bos, CEO of Van Cleef & Arpels.

Dordet, of La Montre Hermès, echoed this feeling: “You may carry a smartwatch during the day for practical reasons and later want to feel elegant, have a kind of intimate bond with your object, or just feel good about yourself. I believe in the comfort and elegance that a fine watch brings today so I think there is room for both and I’m not particularly worried.”

The key difference is between an industrial object and a craft object. Behind every handmade watch there are years of studies involving several disciplines, creativity and meticulous work. The sector relies on traditional know-how and some very specific skills.

“In watchmaking and Haute Horlogerie in particular you have more than forty trades, which are often craft trades, so many things are handmade, using ancestral skills, of course, that have been modernised thanks to new technologies and new materials. It really is an industry where we have this duality: tradition and innovation,” said SIHH Director Fabienne Lupo.