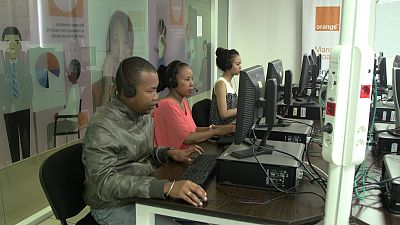 New information and communication technologies is a booming sector in Madagascar, and is becoming a key driving force for growth, drawing an increasing number of direct foreign investors to the island nation.

We want to make sure this fresh talent stays in Madagascar.

“Our goal is to become the hub in the Indian Ocean. We are strategically located between Asia and the African continent.“ – Neypatraiky Rakotomamonjy, Minister of Posts, Telecoms and Digital Development.

Madagascar is connected to neighbouring islands and to Africa by two underwater fibre optic cables – a third is under completion. These come in addition to the satellites delivering broadband and telephony services across the island.

A growing number of training centres cater to a young, digital-hungry population keen to learn and find a job in this sector.

The number of mobile internet subscribers has grown from 20,000 seven years ago to 1,5 million today.

What if the the Highlands of Madagascar were to become the next Silicon Valley?

That is the ambition of the foreign firms that have set up their call centres and digital development services here.

When it comes to outsourcing, Madagascar is a prime destination, thanks to its qualified and cheap workforce.

Its burgeoning start-ups are also a major draw for multinationals.

“We’re working on building ecosystems, to connect these young, skilled workers with international companies, like our clients, so that we can identify local talent and make sure these young people, this fresh talent, stays in Madagascar.“ – Michel Degland, CEO, Orange Madagascar

Another goal for the authorities is to increase digital access in schools and reduce the digital gap between urban and rural areas.

“For the past three years, we have been working with the ministry of education to distribute fifty tablet in each highschool, with internet connections. We’ve also been working with local authorities on programs to educate people in information and communication technologies.“
Neypatraiky Rakotomamonjy, Minister of Posts, Telecoms and Digital Development

And there is room for progress: just one in two people in Madagascar own a mobile phone, and less than one in ten have internet access.