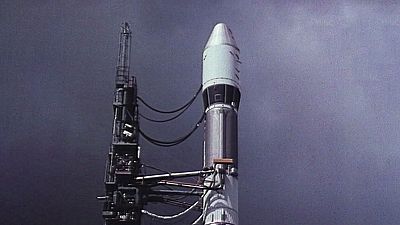 <p>On Christmas Eve, 1979, the first Ariane rocket took off, to huge sighs of relief from the crowd of engineers and <span class="caps">VIP</span>s gathered in French Guiana. This new launcher marked a significant milestone in Europe’s road to become a true space power, but it nearly didn’t happen. </p> <p>The stress of the event had been compounded by a failed launch earlier in the month, which saw an onboard computer cut engine power three seconds after engine ignition, as former Ariane Programme Director at <span class="caps">ESA</span>, Raymond Orye, tells Euronews: “The operation following an aborted launch is a dangerous business, really delicate. It was managed perfectly, but it took some time, because we had to empty out the rocket staged, clean them, and get the launcher ready to go again.”</p> <p>Pierre Ribardière was the Range Operations Director at French space agency <span class="caps">CNES</span> during that first Ariane campaign, and remembers that he and his colleagues “all had a feeling deep inside that while this wasn’t perhaps our last chance, it would be very difficult to carry on if L01 was a failure.”</p> <p>Many factors boosted the tension around this launch – on the practical level, the engineers were running low on the gases they needed to make fuel for the Ariane, and if the Christmas Eve launch had not been successful then they would have had to send the rocket back to mainland France to be refurbished entirely. On the political level the <span class="caps">CNES</span> was under pressure to show it could generate results, and establish France, and Europe, as a serious and significant space power with its own satellite-bearing rockets. </p> <p>The launch on 24th December went well, and Ribardière tells Euronews, “The orbit was perfect. There were no big surprises, and at that moment there was just an outpouring of joy. It was really unforgettable.”</p> <p>For Orye, looking back across the decades, this was a major landmark: “The L01 Ariane launch is the event that left the biggest impression on me in all of my professional career.”</p>