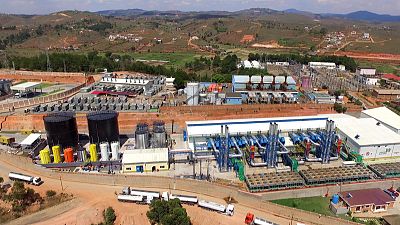 Less than one in five people in Madagascar have access to electricity. The situation improves in urban areas, especially in the capital city, where around 50% of households are connected to the grid. Some three million people live in Antananarivo, where much of the island’s economic activity is concentrated.

There can only be industrial and economic growth if there is energy.

But Madagascar’s infrastructure is old and dilapidated, and illegal connections are widespread, resulting in frequent power cuts.

The goal for authorities is to reorganise the production and distribution of electricity. Their aim: to be more efficient, more cost-effective, and eventually, more environmentally-friendly.

State-owned electric utility and water services company Jirama says the priority is to upgrade the network.

“In order to renovate, you need to invest, and that takes time. Our business plan, developed this year, aims to straighten things out over the next three years. By 2020, we hope to break the cycle of dependency and sort out the distribution irregularities, so we can have a stable, high quality electricity supply.“
Olivier Jaomiary, Managing Director, Jirama

“There can only be industrial and economic growth if there is energy. So it is essential that we achieve growth in energy production and improve people’s access to electricity as fast as possible.“
Hyacinthe Befeno Todimanana, Jirama chairman

The challenge is twofold: to cater to both the population’s and the economy’s growing needs in electricity, and to produce cheaper electricity to reduce dependency on imported fossil fuels for the plants.

Jirama’s aim is to gradually replace power plants running on diesel with plants that run on heavy oil, which are cheaper. Two Heavy Oil Fuel plants have been built over the past year just outside the capital by the Jovena group.

“This plant has two advantages: first, it meets growing energy needs with a capacity of 48 Megawatts. It also allows authorities to cut costs by transitioning from diesel to heavy oil.“
Benjamin Memmi, Managing Director, Jovena Madagascar

“If you look at the complete chain, from diesel, which was an immediate need to address the issues, they are migrating to HFO (Heavy Fuel Oil). They are also, in parallel, trying to develop solar and hydro. So it will give them a good energy mix and a stable power supply.“
Rajesh Singhal, Director, Aksaf Power

The next phase in Madagascar’s energy transition is diversification into renewables. The country has high hydro, solar, and wind potential as well as considerable biomass resources. Several projects are underway, including the construction of hydroelectric dams.

The aim in the next fifteen years is to boost the number of people with access to electricity in Madagascar to three quarters of the population.