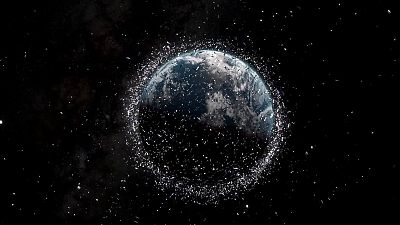 Space debris has become a pressing issue, with objects in orbit flying out of control, posing a risk to satellites and to astronauts. We attended a meeting of space debris experts at ESA’s ESTEC technology base in the Netherlands to find out more about what can be done to deal with the problem.

“We have calculated 8,000 tonnes of space debris out there, which basically means some 29.000 objects which are bigger than 10 centimeters, and much more, maybe around one million, smaller,” says Luisa Innocenti, the head of ESA’s Clean Space Office. “The point which is of importance is that even a very small debris, because of the speed at which it travels, if it hits another body, or working satellite, would make it exploding, creating a cloud of debris. So even a small debris is of importance,” she stresses.

Two basic approaches were discussed at the meeting – firstly, how to remove the debris, and secondly, how to stop polluting. For the former, there are two emerging technologies being developed under what’s known as the e.Deorbit mission – to grasp the wayward space junk, or to catch it.

Right now engineers are using model satellites and robot arms to understand how a spacecraft would approach an out-of-control satellite, maneuver itself around it, and grab hold of it. One of ESA’s experts is Jesús Gil Fernández, who explains what would happen once the e.Deorbit rubbish-collecting satellite is in orbit and approaching an out-of-control satellite: “Once we are sure we are moving like a single object, as if we were dancing, but without touching each other, we can move the robotic arms to grab the launcher adapter ring. And then once we have this grabbed, we can also clamp another mechanism, so that we can steer the target satellite with ‘two hands’ let’s say. So it makes it easy to bring it down to the Earth and destroy it in the re-entry, or in the south Pacific Ocean.”

Another approach being studied within the e.Deorbit project involves using nets flung into space to capture big lumps of space junk. Michèle Lavagna, Professor in Flight Dynamics at Politecnico Milano, explains: “So, the concept is to mimic what the fishermen do on the sea. And so to have a very large net, to stay away from our debris and our mad satellites that are tumbling and moving freely. And then from that distance to keep our net and you just try to wrap all over your satellite. And then, thanks to the motion of the satellite, which is completely unknown and free, you have the nets that wrap around the object, so at that point we can bring the object that we wrapped wherever we want in space, like we do with fishes in seas.”

Right now, e.Deorbit doesn’t have the financing and support it needs to launch. Meanwhile, millions of euros worth of satellite hardware remains at risk from collision, and there are people at risk too. The International Space Station makes regular maneuvers to avoid space debris over 10 centimeters in size. To protect the astronauts against smaller debris that can still do fatal damage, the engineers have built them a kind of coat of armour.

Lilith Grassi from satellite constructor Thales Alenia Space explains what would happen if a small fragment were to hit the protection layer built into ESA’s Columbus module on the ISS: “The debris arrives, punctures this outer metallic layer, which scatters the impact into a huge number of smaller fragments. This cloud of fragments is then absorbed into a second layer, which is a layer of Nextel and Kevlar, which makes sure that the internal part, the pressurised part where the astronauts live, is not perforated.”

The drive to keep space debris at bay is growing as more satellites are launched. Today there are around 2,000 active spacecraft, either in low Earth orbit or far away in geostationary positions. Distant satellites are simply ‘parked’ in graveyard orbits at the end of their lives, while satellites closer to Earth come back home, breaking apart, as can be seen in a unique video of the ATV re-supply ship re-entering the atmosphere over the south Pacific.

Large parts like solar panels are burnt up in the atmosphere, but tough components in titanium and steel survive, and hit Earth. Engineers are studying what happens in those brief destructive moments of re-entry, with a view to building satellites that will break apart when we would like them to. Materials engineer Benoît Bonvoisin, who works for ATG at ESA, tells Euronews: “I think it’s possible to create a satellite that would disintegrate during atmospheric re-entry, and that’s what we’re working on, and for the moment we’re really just at the beginning of that process. Right now we’re trying to understand what happens to the materials we use now, and then we’ll see how we can improve them, how we can work on the design and conception of the satellite, how the different parts of the satellite break up in relation to each other, in order to have a satellite which is safer at the end of its life and creates the smallest amount of debris on Earth.”

Bonvoisin’s work comes as awareness of space debris rises. It’s now 60 years since the launch of Sputnik, and in the past decades little thought was given to how a satellite would end its life. Now rules are in place for space operators, requiring them to define how they will end their mission. Responsibility for space junk lies with every spacefaring nation, too, according to Innocenti: “Everybody polluted. Some countries have polluted more than others, but simply because they were launching more than others – I don’t think we can clearly pinpoint and say this is the good guy and this is the bad one. According to how much you launch, in a way that’s how much you have polluted.”