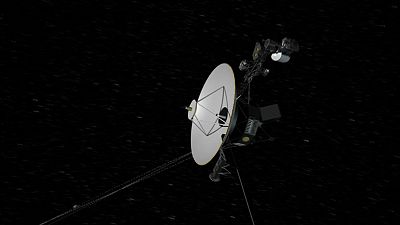 <p>The Voyager spacecraft were the first probes to catalogue our solar system’s outer planets, and are now flying deep into space, becoming the most distant man-made objects ever. </p> <p>Launched 40 years ago, in August and September 1977, the mission took advantage of an unusual moment to visit everywhere from Jupiter to Uranus. </p> <p><span class="caps">ESA</span> planetary scientist Gerhard Schwehm recalls the initial concept: “Somebody in the US had this great idea, that if you select the launch date properly, that you can with one spacecraft you can visit all the planets. So they launched in 1977, then they went to Jupiter, Saturn, Uranus, Neptune.” </p> <p>The two probes made a string of discoveries, such as the active volcanoes on Jupiter’s moon Io and the intricate nature of Saturn’s rings. Even now, Voyager 2 is the only spacecraft to have passed close to Uranus and Neptune. </p> <p>Jorge Vago, <span class="caps">ESA</span>’s ExoMars project scientist, remembers seeing the Voyager images in the 1980s: “The worlds were amazing. Saturn is super-beautiful, the storms systems and the atmosphere of Jupiter are amazing. The moons – Io with all its volcanism, and Europa, white with all this water. So, just visually, it looked like a collection of jewels.”</p> <p>The two probes took different paths into deep space, but are both beyond the orbit of Pluto. As of February 2017, Voyager 1 was at a distance of 20.6 Billion Kilometers and Voyager 2 at 17 billion kilometres from the Sun.</p> <p>“The Voyager missions are a great example of how big space is,” underlines <span class="caps">ESA</span>’s Rosetta Project Scientist Matt Taylor. “The fact that we sent them out in the 1970s, and there’s still the ongoing debate about whether they’ve left the solar system or not. It’s that old adage, ‘Space is big’, and the Voyager missions are demonstrating that, because they haven’t even got out of our back yard yet.”</p> <p>The Voyager mission should continue to tell us useful information about what’s known as the ‘heliopause’, the area of space where the Sun’s influence comes to an end, and interstellar space begins. The spacecraft are expected to operate until the 2020s, when they will run out of power and the ability to send data back to Earth. However, they will carry on flying through space for millions of years, and will likely end up in the celestial swirl around the Milky Way’s central black hole.</p>

Can we solve the mysteries of Earth's atmosphere?