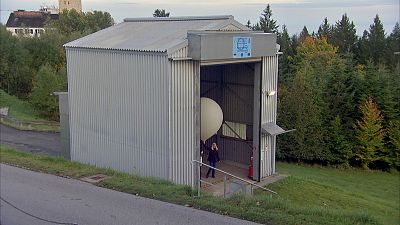 Earth’s atmosphere still holds many secrets for science, but with the latest satellite launches and long-running observations from the ground, we are now gathering far more and better quality data about the weather and climate than ever before.

What we're trying to do is provide the solid data, together with the satellites, that will tell us how the atmosphere is changing

We begin our story with the team at the Hohenpeißenberg weather station in Bavaria, a historic spot where weather balloons have been launched every week for the past 50 years. The information these balloons gather is vital to feed weather and climate models, and measure Earth’s high altitude ozone layer.

“We measure the temperature profile, the humidity profile, the wind profile, and in addition we measure the ozone profile. And we’re interested in it because we want to see how the ozone layer recovers,” explains Wolfgang Steinbrecht, Head of Ozone Group at German weather service Deutscher Wetterdienst.

The balloons drift up at 18km/h, sending information back on this one part of our atmosphere by radio signal.
“First we’ll go through the first layers, and then we’ll reach the free atmosphere here, which is not contaminated by the stuff close to the ground. It’ll get colder, colder, colder, colder, until we start reaching the stratosphere, where most of the ozone sits, and where the temperature gets warmer again. That’ll happen at about 10 kilometres today,” he says.

Several thousand weather balloons are launched worldwide every day, but it’s not enough to get a really global picture. To do that, you need to go to space, and that’s exactly what ESA’s Sentinel-5P satellite did on launch on 13th October this year.

It’s part of the European Commission’s Copernicus Earth observation programme, and will measure pollution and ozone levels in unprecedented detail, offering vital information on where harmful emission come from, and where they go.

Sentinel-5P’s instrument, Tropomi, developed in the Netherlands, could also be the instrument to clear up the mystery of whether our planet’s ozone layer is on the road to recovery, after harmful CFCs were banned in 1989.

Currently there’s a hole in the ozone layer between September and December over the South Pole, and globally levels of ozone are lower now than in the 1960’s or 1970’s.

However, there’s a great deal that remains mysterious about Earth’s atmosphere. In the coming years, new European satellites will seek answers to how pollution contributes to cloud formation, and the role of methane in climate change.

Then there’s the question of the wind – It’s a fundamental parameter, yet we really don’t know enough about it on a global level. ESA will try to address that in 2018 with a satellite called Aeolus, which will measure Earth’s winds from space for the very first time.

Aeolus Project Scientist at ESA, Anne Grete Straume, tells Euronews: “At the moment we are limited, in that we don’t have many wind measurements everywhere. This is actually one of the biggest challenges in forecasting today, is to get the wind right.”

“And that’s where the satellite measurements come in, and this mission, which will provide wind measurements from the ground to far up in the atmosphere, all over the globe, to help the modelers do better.”

Developing a device to measure wind from space has been a long and complex process. The engineers at the German aerospace centre in Oberpfaffenhofen have been flying tests in their aircraft to calibrate their Lidar instrument.

Once launched, the Aeolus satellite will measure winds at 10 to 30,000 metres above our heads, zones where there are virtually no readings at present. That data will be used to improve forecasts right away.

We’re now gathering much more and better quality data than ever before, which will be essential information to solve the many mysteries of Earth’s climate.

But do we really understand what’s going on? We put the question to Steinbrecht from Deutscher Wetterdienst: “So we know climate is changing, what we do not know in detail is what it means for different regions. So, will we get warmer summers here? Probably. Will we get more rain? We already don’t know that. How’s it going to change in different parts of the atmosphere, what will be the effects of that? What we’re trying to do is provide the solid data, together with the satellites, that will tell us how the atmosphere is changing,” he says.