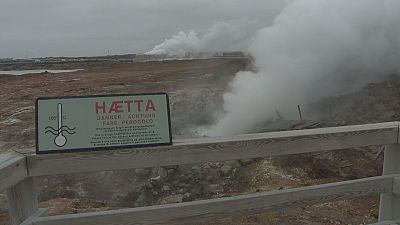 “The new frontier of renewable energy is crossing Iceland. In the land of fire, the homeland of geothermal energy, they are testing a technique to drill wells five kilometres deep to bring steam to the surface at temperatures up to 500C.

If everything goes well, the amount of electricity produced by these sources will increase 10 fold.”

Hot liquid and steams stored inside the Earth have a huge potential to generate electricity, such as through turbines.

Here, in the Reykjanes peninsula, they’re drilling beyond the usual 2.5km depth of a geothermal well. Technicians have reached what they call ‘supercritical steam’, a huge source of power reaching 500C, close to magma reservoirs.

Gudmundur Fridleifsson, a Deep Enhanced Geothermal System (DEEPEG) project coordinator, Chief Geologist, HS Orka, says: “We need to drill deeper and help nature a little bit to get the heat out of the ground.

“If we find a fluid at this temperature, it’s what we call super critical conditions, and if you can drive this gas up to the surface through the drill hole into a power plant in this case we are expecting 30,40 or 50 Megawatts.”

That is the goal of DEEPEGS , a project, partly funded by the EU and driven by a consortium led by Icelandic companies. It aims to increase the use of Geothermal systems in Europe.

Says Fridleifsson: “Experiences gained in Iceland can be used in Italy….and the same with the experiences in Japan or New Zealand… So, we can use the same techniques. So, it is a learning process, we like to learn from each other.”

One of the main challenge for the DEEPEGS team is finding out what the rocks are made of while testing the new deep drilling techniques. Being aware of the composition of the soil is key to avoiding structural damage or security issues.

“Drilling into the unknown is a big challenge, todays we have no means to see exactly what we are drilling through,” says Albert Albertsson, a mechanical engineer at HS Orka.

“The problem we are facing is the chemistry of the fluid… we have to deal with scaling, corrosion and other things.”

Drilling the earth’s crust is a risky operation also because the drill can go through a magma reservoir or small quakes can be generated, especially in volcanic areas.

Fridleifsson adds: “We try to minimise the risk while we use geophysical instruments, volcanology history, mapping and so on, but also a lot of science tools before we drill.”

Bringing up steam from the hot heart of the planet means also getting also harmful products such as CO2 and sulphur. Nevertheless, the icelandic approach is: recycling everything.

“If we look at a powerplant as a box,” says Albertsson, “we have to look at every every ressource stream coming into the box, like power, hot water, ground water, just name it, look at it as a valuable stream not to be wasted”

Final results on this technique will be ready by the end next year. If this technology can produce more power than conventional geothermal wells, fewer wells would be needed to produce the same amount of energy and the environmental impact will be lower.

Takeaway: Searching heat in the heart of earth