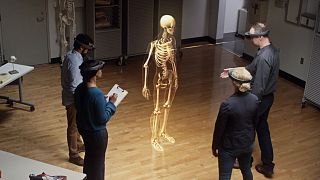 Being connected is changing the way we live, work and play.

What started with simple e-mails has evolved way beyond expectations.

We are entering what many have termed Gigaworld. A world where millions will have access to broadband speeds of 1 gigabit per second or more.

A new generation of high-speed stable networks is already opening up a world of possibilities. A future worth billions.

A new report estimates that the Gigaworld innovation cycle will unlock a market value of 250 to 660 Billions Euros by 2025 in Europe.

Three sectors should thrive in the next decade: mixed reality, virtual telepresence and automated living.

Max has a studio in London that provides mixed Reality Solutions using Hololens, from Microsoft.

“For one client, a London property developer, we virtualise their data to visualize the future of this site on hololens and they are using it to show potential clients how this looks like,” says Max Doelle, CEO of Kazendi.

“Hololens enables you to simply place the building on top of the table. And pan around in a map to explore the infrastructure and view more information.

“We can’t show too large models, we can’t show too many models at the same time, otherwise it will start to lag. If everyone has access to one gigabyte or plus internet connection we can simply use data to computer experience and stream it to the device. Basically allowing for unlimited internet content.”

We visited Madrid, in Spain, to interview the manager of the Philips Hospital to Home program. One of their main devices for telehealth is a tablet that allows patients to give information and talk to their doctor or nurse without leaving their home.

“The clinicians can look at the data every day and can react much earlier to any sign of worsening. We really improve efficiencies,” says Dr Cristina Bescos from the Philips Hospital to Home/Telehealth

“They can manage up to 200 hundred patients per day.

“For the business, it is a clear reduction cost, especially in emergency and admission costs. For the patient, it reduces unnecessary visits to hospital. They feel more in control for taking responsibility of their own condition.”

This is just the beginning of what could be a revolution in the healthcare sector.

“Everything is becoming more mobile and wearable. We will see technology completely immersed. We will not even notice we will be monitored or managed in our home, in our environment,” Bescos adds.

The University of Leeds, together with four other universities in England, has a pioneering project to creat ‘self-repairing cities’ by 2050.

The idea is to reduce street works and save money. For that, they are developing robots and drones to do works such as install cameras on lamp posts and fix potholes. (cover this part with general footage of Leeds University, profile of the interviewee and drones working.

Says Dr Raul Fuentes from the University of Leeds: “We want to have robots that will detect that one millimetre defect and sort it out before it becomes a real problem.

“To maintain a place like Leeds, we are going to need thousands of robots probably. These are all going to be connected, probably to a control centre, or some kind between themselves. In order for that connectivity and communication to happen we need a significant amount of bandwidth. This is where the gigabyte world comes into play.”

In Brussels, Belgium, we talked to an economist who thinks the Gigaworld will be transformative, but he reminded us this revolution doesn’t depend only on speed. public policies and regulations can accelerate it … or hold it back.”

Gregory Pankert, author of the ADL report, says: “Policy makers have a critical role to play to accelerate, to support the Gigaworld innovation cycle but not to prescribe what needs to be done because that very often kills innovation.”

If the innovation cycle works properly, technology can advance further and further. The future will deliver a world we can barely start to imagine.