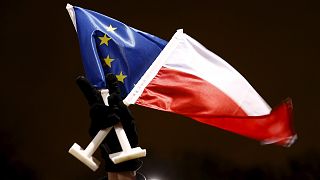 <p>A mix of criticism and concerns is mounting in Central Europe against the two-speed Europe project. Some of the political leaders of Central Europe gathered at the <a href="http://www.forum-ekonomiczne.pl/?lang=en">Economic Forum</a> held earlier this month in Poland’s southern city of Krynica. </p> <p>The rift among new and old Europe was on the top of the agenda, with its controversial topics such as the two-speed Europe, the refugee crisis and the posted workers row. </p> <p>The speaker of the Polish Senate, Stanislaw Karczewski told euronews that he believes in a reformed EU where solidarity and national sovereignty can coexist.</p> <p>“Poland is ready to start the discussion on the future of the European Union at any time. This is our position and this position is shared by many other countries in this Central and Eastern European region, not only by the current members of the European Union, but also the countries that aspire to become members. So we support the concept of Europe composed of countries which display solidarity, which are sovereign, which cooperate closely but which must be sovereign states.”</p> <p>The economy of Poland has been growing since the country’s accession to the EU. Poland went through very difficult reforms in the ’90s with huge social costs. Now Poland wants to play a major role, at political level, among the leaders of the EU. And that’s not easy.</p> <p>Poland has been trying to upgrade its political position in the EU since 2004. But France and Germany have been showing some reluctance in sharing the EU leadership with Warsaw. There are basically two reasons for that: the Central European countries traditional unwillingness to yield shares of their sovereignty to the EU and their small economic weight. Moreover, despite the dramatic economic growth, the distribution of wealth did not work properly.</p> <p>“There was a large group of people who did not profit from this transformation, a sort of left in the outskirts,” explained Agnieszka Markiewicz from the American Jewish Association (<span class="caps">AJC</span>).</p> <p>“It’s important to realize that the <span class="caps">GDP</span> of Poland today, is somewhere similar to the <span class="caps">GDP</span> of Greece today, which means that we have still a lot of catching up to do and it’s a huge challenge I think to get Poland where it should be, where it wants to be and where it’s comparable to the sort of old Europe and West Europe.” </p> <p>Warsaw has also been at odds with the EU executive led by Jean Claude Juncker who has accused the Polish ruling party of eroding democratic standards, trying to grab control of the judiciary. Juncker’s<br /> attitude, which has been described as “harsh,” has not been welcomed by <br /> some Poles, including EU supporters who would like him to change his rhetoric.</p> <p>“To behave something less arrogant and more polite, like stop talking about others politicians in Europe that they are dictators or like, insulting them,” said Joanna Snieg, a student Jagiellonian University.</p> <p>“Because sometimes I do agree with him, absolutely, but he shouldn’t talk such things publicly.”</p> <p>A part of the Polish society worries that Poland’s position in the EU could be downgraded if a core group of countries, such as those sharing the euro, decides to integrate further. Warsaw openly rejects the so-called multi-speed or two-speed European Union, an idea supported by some EU member states, that would involve some states pursuing deeper integration faster than others. At the economic forum in Krynica, Polish President Andrezj Duda insisted that the EU should remain a union of “free” and equal nations. Otherwise, it would risk disintegration.</p>