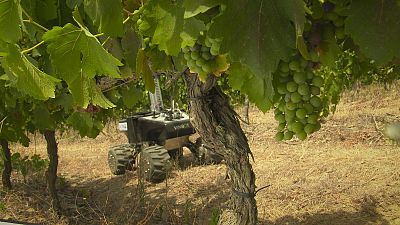 At a vineyard in Tomar in Portugal, scientists from the University of Lisbon are testing out a new robot designed to increase the productivity of winegrowers.

It can climb slopes up to 45° and generate maps that accurately assess the yield of vineyards.

The Vinbot – as it’s been called – is equipped with a sensor system to allow navigation, localization and data acquisition.

Field demonstration of Vinbot of the 1st Workshop of Smart Viticulture. #Robot#Vineyard#Vinbot#Viticulture#winepic.twitter.com/NdkxhoCchL

It uses a single camera that collects multiple shots of the plants. Further treatment of those images allows the identification of grapes and bunches so future yields can be predicted.

“It navigates through the vineyard in an autonomous way,” says agricultural engineer André Barriguinha from Agri-Ciencia. “It captures images, that are then downloaded on a server in the cloud. The images are then processed with algorithms to develop maps that show the productivity of the different parts of the vineyard”.

Scientists from the European research project have teemed up with winegrowers to develop the prototype.

Researchers say the robot has been designed to predict future yields with a margin of error of just 10 to 15 percent. Winegrowers such as Pedro Sereno in Portugal, say these maps on future productivity can be can be very valuable:

“Our vineyard is very heterogeneous. It is full of slopes, with higher and lower places that are more, or less productive. The information provided by the robot can allow me to identify these different places, and manage each according to its needs, in tailor-made, precise and efficient ways”.

Scientists see the robot as yet another tool in what is called “precision viticulture”, developed to increase the competitiveness of the wine sector in Europe.

“A winegrower that knows his vineyard well accumulates a great deal of knowledge,” says Carlos Lopes, an agricultural engineer at the University of Lisbon. “ This knowledge basically comes from the visual observation of the vineyard. This technology goes a step further. It makes it possible to assess, every year, the behaviour of each plant and the quantity and quality of the grapes. In the end, this can provide a huge database about the vineyard that is more accurate. Of course, ideally, the best option is to combine both practical and technological knowledge of the vineyard”.

Winegrowers like Pedro Soreno confirm that the robot could indeed help them maximize their benefits by better segmenting production throughout the season:

“For instance, if the information from the robot tells me that in a given place the grapes are heading towards early maturity. I can decide to harvest them early in the season to produce a wine with better quality. And I can wait for the other grapes to mature slowly until they reach their optimal quality point”.

At present the cost of the robot is estimated to be around 30.000 euros. Subject to some some upgrading and validation, it’s expected to go on the market within two to four years.