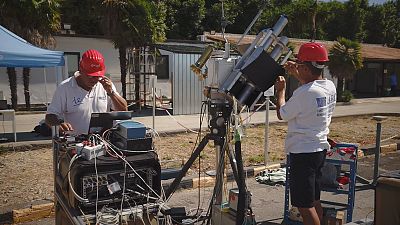 How much solar power does a photovoltaic solar power unit produce? The answer isn’t obvious. The strength of sunshine changes depending where you are in the world and what time of day it is, affecting the energy output of solar panels and cells. But researchers need a common reference and that’s why they meet to adjust their instruments each year – this year it was at the 7th International Broadband Intercomparison event in Catania, Sicily.

Small differences need to be eliminated, which is why we take these measurements

The process is similar to the scientific quest more than 200 years ago to standardise measurements such as the metre, as was done in Paris at the International Bureau of Weights and Measures where a physical example of a metre is still kept from the eighteenth century.

“It’s actually ‘measuring the metre’. We can’t measure the metre like in Paris, but we use the sun as a metre. So everybody is comparing to the same sun, or the same metre,” Wim Zaaiman said at event in Catania.

These simultaneous measurements allow scientists to produce what they refer to as “reference cells”. These are small, high-quality solar cells with exactly defined characteristics. The overall intensity of the sunlight is taken into account, along with sunlight’s spectral composition, which varies greatly throughout the day and around the world.

These references are vital for the growing photovoltaic industry. In this multi-billion euro market, tiny imprecisions in measurements can decide a company’s success or failure.

Roberto Galleano, a meteorologist at the European Commission’s Joint Research Centre (JRC) – its in-house service – which is based in Ispra in Italy’s Lombardy region explained the necessity for meeting up annually:

“These small differences need to be eliminated, which is why we take these measurements in standard conditions, in an internationally approved way.”

At the JRC’s European Solar Test Installation unit highly sophisticated sun simulators are used to produce affordable reference tools for the industry. Commercial solar panels can then be reliably tested and certified according to the common standards transferred from the sun-calibrated reference cells.

The unit has one of the world’s largest sun simulators. Eleven powerful projectors throw a blinding hot beam of artificial sunlight onto a full-size solar module to gain valuable data which can then be used by factories to calibrate the solar panels and other units that they produce.

The result, says Ewan Dunlop, a JRC researcher in energy efficiency and renewables, is an increase in public confidence in solar power.

“We guarantee the measurement chain from the basic solar sunlight which we saw measured in the beginning, through the transfer to secondary devices, and into real products, giving people trust that what they’re purchasing, what they’re investing in, is actually delivering what they want delivered.”

Takeaway: How do we know how good a solar cell is?