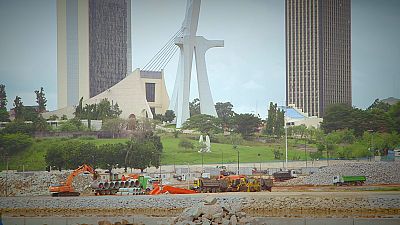 Ivory Coast is witnessing impressive growth, with a GDP rate of eight percent last year, according to the World Bank.

In 2016 it was Africa’s fastest growing economy, but 70 percent of its population still works in the agricultural sector.

It’s the world’s biggest exporter of cocoa beans, but if it’s to continue growing at such a frenetic pace it will have to diversify. It’s these economic paradoxes that the government hopes its four year National Development Plan (NDP), which began in 2016, will resolve.

And it also hopes Ivory Coast can turn its back on many years of violence and political turbulence that began in 2002 when an armed rebellion split the West African state in two.

Euronews met up with Prime Minister Amadou Gon Coulibaly in the capital Abidjan to hear more about the NDP and the vision behind it. “Our goal is fund this plan by 40 percent from the public sector, to support all infrastructure-related activities, and about 60 percent from the private sector,” he said.

One of the biggest challenges facing Ivory Coast is demographic: more than 60 percent of the population is under 35 years old, a similar story across much of sub-Saharan Africa.

With this in mind, the government says it will boost the education sector as well as elevate women’s status in society, which is an often forgotten factor holding back economic growth.

If it is going to attract greater foreign investment, Ivory Coast must also boost the skills of young people entering the jobs market
The government has promised to cut business taxes such as VAT and in return it’s expecting investors to create jobs for young people.

“We will ask investors for their part to make a return by creating local jobs. That should be considered as an important part of the investment,” Coulibaly said.

The government has launched a one-stop shop for foreign investors, the Ivory Coast investment promotion centre (CEPICI), for investors to turn to when they arrive in the capital Abidjan.

CEPICI tries to match opportunities in key business sectors such as telecommunications, energy, real estate and mining with potential investors.

Whilst Ivory Coast is still very dependent on agriculture – its massive cocoa bean crop amounts to about 1.9 million tonnes – there are signs that it is moving towards being an economy, not just reliant on export revenues from one dominant cash crop, but also able to move into processing, which in the case of cocoa beans means producing chocolate.

In 2015 CEMOI, a French chocolate producer established itself in Abidjan, investing six million euros in a factory which produces chocolate one hundred percent “made in Ivory Coast”.

Taking Euronews on a tour of the factory its general manager Benjamin Bessi said: “The activity here makes it possible to process 70,000 tons of cocoa. So we receive cocoa from cooperatives and we do all the transformation from the cocoa bean to the finished chocolate.”

Asked what the recipe for success is Bessi pointed to training. “International groups, when they invest here, they look for these type of profiles: well trained Ivorians who have expertise.”

Once dominated by France, its former colonial ruler, investors are now coming from elsewhere, including African economic giant South Africa and the United States.

But business regulations remain a headache for foreign investors with the World Bank’s Doing Business Report ranking it only 142nd out of 190 in the world for ease of doing business in terms of enforcing regulations, access to electricity, getting credit, trading across borders, tax obligations and so on.

And Ivory Coast ranks fifteenth in the African economy rankings, suggesting that, whilst it is doing well, there is clearly room for improvement.