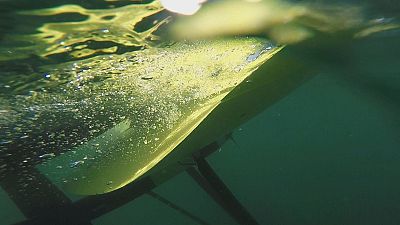 It looks like a big toy, but it’s a technological jewel designed to produce energy from the tides.

It is a prototype kite, very different to those used for flying. Its design allows it to glide underwater at speeds up to ten times faster than the tides themselves.

The sea inlet of Strangford Lough, Northern Ireland, the largest in the British Isles, covers 150 square kilometers. Its tides regularly rise to an amplitude of four meters at speeds averaging 1,4 meters per second.

For these natural reasons, researchers studying how to produce energy from tides chose this location to test the first submarine glider of its kind.

Heije Westberg, the chief technical officer at Minesto, explains:
“It’s a kite, and it’s tethered to the sea floor. In a tide we have a lifting force: the water pushing. The wing making it fly forward; it actually accelerates, so it makes the turbine spin. And when the turbine spins, you produce electricity. “

The kite is heavily equipped with sensors and communication tools.

Scientists from a European research project conduct tests to assess the best design and speeds and depths under the water in which the kite can produce energy in more efficient ways.

Neil Laughlin, Software Engineer, Minesto
“The flow speed (of the tides) differs as you look through the different depths in the water column. And we can capture that; the kite has the flexibility that we can change a few parameters and tell it to fly at a different height depending on where the nicest tidal flow speed is.”

Light but resilient materials and a fully hydro-dynamic design allow the kite to travel underwater in good harmony with tidal flows at varying speeds.

Heije Westber
“It’s not an objective in itself to fly as fast as possible. The thing is to create as much energy conversion as possible. If you fly too fast, that will of course stress the system; you can have failures and faults and breakage, whatever problem. So you need to optimise the velocity towards the power production.”

Tests are taking place in a protected area, teeming with seals.

Scientists are building a sonar platform to track the passage of marine animals, to better understand how they interact with the kite.

Nancy Cecilia Zambrano, Test Engineer, Minesto
“We are currently developing the software of the system. We need to clearly discriminate between objects; we need to clearly distinguish what’s a marine animal from what may be an object drifting away with the tide.”

The goal now is to build and install much larger kites with spans of 12 meters, each designed to produce up to 1.6 gigawatt hours of electricity per year.

Scientists are using these tests to further enhance the technology.

“Starting from the turbine, going through the power electronics and the transmission of electricity to the shore… we are looking at what is the current concept [for these components] and we are trying to evolve [them] and improve performance and reduce costs for certain components.”

A full-scale device will soon be installed in the waters off of Wales.