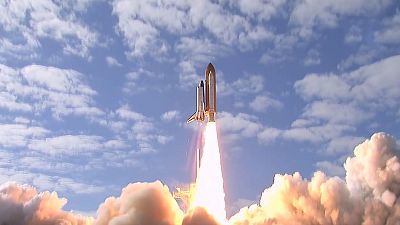 <p>The <span class="caps">NASA</span> Space Shuttle is one of the most iconic spacecraft of the 20th Century, a machine which defined the post-Apollo era and heralded a new era in re-usable space technology. The first to fly was Columbia, on 12th April 1981, and the Shuttle craft continued to offer mankind a unique vehicle to fly into orbit until retirement on 21st July 2011.</p> <p><span class="caps">ESA</span> astronaut Claude Nicollier flew on board the Shuttle four times from 1992 to 1999, and recalls that when he first looked at its asymmetrical shape he asked himself, ‘Wow, is that really going to work?’”</p> <p>Recalling launch, he tells Euronews: “It took about eight and a half minutes to get to orbit.”</p> <p>“It was quite a ride, especially the first stage, with a lot of shaking. Then separation of the boosters, with huge flames. Every second you were adding 30 metres per second to your velocity, and this for a minute and a half, to reach the 28,000 kilometres per hour velocity.” </p> <iframe id="iframe_container" frameborder="0" webkitallowfullscreen="" mozallowfullscreen="" allowfullscreen="" width="100%" height="400" src="https://prezi.com/embed/zj6t3oe7gt1l/?bgcolor=ffffff&lock_to_path=0&autoplay=0&autohide_ctrls=0&landing_data=bHVZZmNaNDBIWnNjdEVENDRhZDFNZGNIUE43MHdLNWpsdFJLb2ZHanI0U2xBMEpHQVdtZlhOWUo3SFZiUldZdUZnPT0&landing_sign=AdVcSAIFZfDPFIRnUBRFC5ACYHXCGc3ZBzcb73bjNOM"></iframe> <p>Once in space, the sensations continued: “(At) main engine cut off, and you go from 3G to Zero G in about a second and a half, and that was quite impressive, especially the very first time it happens to you.”</p> <p>The Shuttle spacecraft were equipped with a load bay in which satellites could be grappled by the Canadarm robotic tool, caught, repaired, and released. </p> <p>“The intervention capability of the Shuttle was really remarkable,” says Nicollier. “You could rendez-vous with a satellite, pick them up with a robot arm, put them in the payload bay, bring them down to Earth.”</p> <p>The Shuttle had a unique approach to re-entry. It began by flying backwards and using its engines to brake down into the upper atmosphere, before turning around and gliding to the ground. “In order to re-enter the atmosphere on this elliptical orbit we had to take the proper orientation, which was 40 degrees nose up,” says Nicoller. “Right after we had gone through Mach 1 the commander was taking manual control, and he flew entirely manually.”</p> <p>“Great! For a pilot it was a dream, a real dream,” he smiles. </p> <iframe width="640" height="485" src="//www.thinglink.com/card/909006261599600642" type="text/html" frameborder="0" webkitallowfullscreen mozallowfullscreen allowfullscreen scrolling="no"></iframe>

Looking at Earth as a planet

Five reasons why the Shuttle programme is a Legend of Space