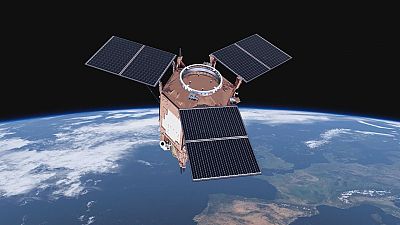 “You have probably used an app on your mobile phone to get the weather forecast. Now, thanks to a satellite network and ground-based stations, it is possible to get through an app on your phone information about pollution in your cities.

‘The university of Bremen, in Germany, is collecting different kinds of data, in order to obtain a general picture of the pollution in the atmosphere,” reported euronews correspondent Claudio Rosmino from Germany.

Earth’s atmosphere is a complicated system, influenced by a large number of factors. Observation satellites orbiting around our planet constantly monitor the state of the air we breath and how natural and man-made pollution are affecting the quality of the atmosphere.

Researchers at the university of Bremen have pioneered the measurement of atmospheric pollution.

“Measurements from space are essential because they provide us with the global picture from the local to the global scale. They to tell us what the meteorology and atmospheric chemistry are doing to our emissions.

‘The wind system is moving the air around. At certain times of the year Europe is venting to the pristine regions of the Arctic. Similarly, in Europe, we receive in summer, often, pollution coming from America. We have to understand the sources, the so-called surface fluxes, the emissions and we also have to understand the atmospheric chemistry and physics which enables the pollution to be sent around the globe,” explained John Philip Burrows, Professor of Physics of Atmosphere and Oceans, University of Bremen.

To detect every piece of the chemical puzzle composing our atmosphere, scientists work with data collected by spectrometers, aerosol analysis and satellite measurements as with the ones coming from the Earth observation Copernicus programme.

In the Bremen observatory, above the university roof, the sunlight is decomposed into its basic radiation and analysed to find traces of pollutants.

“You can say that every molecule has its finger print in the spectrum. There are million of lines, so there is an enormous amount of information in it and these lines in this case now can be attributed to CO2. So, it’s the CO2 in the atmosphere, which is absorbing solar sunlight,” explained Justus Notholt,
Professor of Remote Sensing at the University of Bremen.

This truck measures atmospheric pollution and the measurement are then combine with satellite data. #spaceeuronews</a> <a href="https://t.co/PTKf0DS9lR">pic.twitter.com/PTKf0DS9lR</a></p>— stroclaudio (@RosmiNow) March 1, 2017

The university uses a truck as a mobile measurement station. It helps detect the footprints of smog and industrial emissions which affect the air quality.

Methane and CO2 are the greenhouse gases driving global climate change and they are strongly linked to human activity, but to have the wider picture, it is crucial to distinguish between man-made and natural pollution.

“The truck provides a unique set of different instruments. On one hand we have instruments which are just sucking in the air around us, which means that we are able to analyse the air for pollutants. On the other hand we have remote sensing instruments using more of less the same type of analysis as the space born instruments, to having a broad idea of pollutants around us,” Folkard Wittrock, Research Group leader at the University of Bremen pointed out.

In the coming months the Bremen researchers are launching a further initiative to investigate the impact of major population centres on air quality at a local and regional level by dedicated airborne campaigns.

This ‘Carbon Dioxide and Methane Mission’ will provide new data in order to support the validation of satellite measurements.

“We have two intensive air born measurement campaigns where we get a kind of snapshot of the chemistry of these outflows and in the analysis we combine this with satellite data to understand how the chemical evolution of the outflows from mega-cities,” explained Maria Dolores Andrés Hernandéz,
Research Group leader, University of Bremen.

Once the ‘air pollution detectives’ have gathered all the evidence, they must process this huge amount of data. That final step requires complex algorithms and IT infrastructures to get a coherence between measurements from the observation satellite network and the different sensors on Earth. This is the base to build a tool to forecast pollution.

“The satellite gives us these beautiful maps, but you can only use them really if you have a validation measurement to compare to and this needs to be a very good measurement and it needs to be taken from the ground.

‘Once you have launched the satellite, it is out of your hands and you cannot bring it to the lab and double check and test it. It’s there and you need to trust the data, and the only way to get this confidence in the data is by comparison to other measurements,” said Andreas Richter, Senior Scientist at the University of Bremen.

The increase of greenhouse gases have changed the Earth’s energy balance and accelerated the climate change process.

The impact on global warming has revealed the vulnerability of the planet’s ecosystem.

That makes scientific studies fundamental for our ability to cope with high impact weather events and establishing suitable policies.

“Mankind has a large influence on the climate and the problem is everything that we are doing now has very long time scales, we have to make now decisions so that we can see results in 50 years or maybe even later,” explained Justus Notholt,
Professor of Remote Sensing, University of Bremen.

“We need better information and better quality information, in order to be able to provide the right mechanisms and the best possible models for prediction of human impact and natural phenomena.

‘As we have seen in Europe the improvement of the air quality, and this is certainly the result of policy. It shows that people can do it, governments can do it, but we’ve got a long way to go,” said John Philip Burrows,Professor of Physics of Atmosphere and Oceans, University of Bremen.

When it is launched into orbit later this year, ESA’s satellite Sentinel-5 Precursor will provide high-level measurements on the Earth’s atmosphere, surpassing the performances of current in-orbit instruments.

It will boost the quality of data gathering and enabling researchers to optimise their models.

Remembering Early Bird the satellite that changed how we communicate