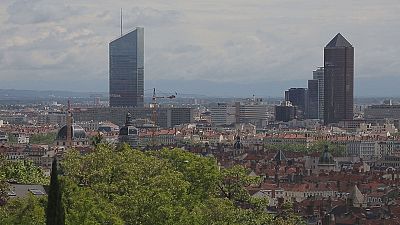 Serge Rombi: “Welcome to Business Planet from ‘Now Coworking’ in Lyon. It is the second biggest city in France for entrepreneurship. We are with Raddouane Ouama who is the coordinator of “Lyon City of Entrepreneurship” which is a very active network.”

“Yes, our ambition is twofold – to promote entrepreneurship and to help businesses grow. The network has 50 partners, 200 experts, and each year supports more than 15,000 entrepreneurs,” Raddouane explained.

Serge Rombi: “Well let’s take a look at a concrete example, a Lyon SME that has become a champion of innovation in the medical industry sector.”

This is a real revolution in the treatment of glaucoma. It is a disease which causes the progressive destruction of the eye and is one of the leading causes of blindness in the world.

This doctor uses a tool which is unique in the world. A technique that uses ultrasound and means invasive surgery is avoided. (courtesy of Pr Florent Aptel / CHU of Grenoble).

Let’s meet the co-founder of Eye Tech Care the company behind this innovation.

“Every day there are patients somewhere in the world, whose eyesight we will save, we will prevent them from becoming blind. For me that is a complete accomplishment,” said Fabrice Romano co-founder, Eye Tech.

More than 50% of the turnover of this SME is reinvested in research and development. The product has evolved considerably since its launch in 2013. After being marketed in Europe, it is about to be launched in India and China.

“Taking all products together the worldwide market for glaucoma is worth around €5 billion. In terms of patients, there are about 120 million people with glaucoma worldwide and a quarter of those are in China,” explained Dietrich Wolf, CEO Eye Tech Care.

When the company was created it received financial aid and was hosted for a year in one of the business incubators of the Lyon network.

This allowed it to establish the first patents and prepare the fund raising. In short, the transfer of technology to the market.

“What is remarkable is that the Lyon City of Entrepreneurship network is extremely efficient. All members of the network work well with each other. If you have a question somewhere in the network, someone will have the answer and quickly,” added Fabrice Romano.

Serge Rombi: “Raddouane, we have just seen that example. It is not for nothing that this enterprise is where it is today.”

Raddouane :“Yes. The medical industry is one of our centres of excellence, supported by major historical players, but also by numerous, innovative SMEs.”

In Europe, the medical industry employs 500,000 people. Almost 95% of companies are SMEs. As for the Lyon network, this year it received one of the European Awards for the Promotion of Entrepreneurship from the EU in the category “Promoting Entrepreneurial Spirit”. The awards reward those who promote entrepreneurship and small business at the national, regional and local level.

Serge Rombi “You’ve been supporting entrepreneurs here for 15 years, and the idea is to expand this system on a European level. Is that right?”

Raddouane “Yes, I would like to appeal to other European cities that would like to join us in pooling our experiences and developing a more efficient ecosystem at European level.”

Serge Rombi “The appeal has been made! Thank you Raddouane. See you soon for a new episode!”