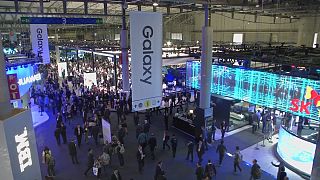 <p>The latest smartphones were on show at the <a href="https://www.mobileworldcongress.com/">Mobile World Congress in Barcelona</a> where Huawei tried to make an impact with the P10 and P10 Plus models in the absence of direct competitors Apple and Samsung.</p> <p>Away from the cutting-edge technology, the star of the show was the retro Nokia 3310, the highest selling phone of all time with 126 million units. It even comes with its memorable snake game. </p> <blockquote class="twitter-tweet" data-lang="en"><p lang="en" dir="ltr">The winner of Mobile World Congress day 0: nostalgia. <a href="https://t.co/trkTVukSm8">pic.twitter.com/trkTVukSm8</a></p>— Vlad Savov (@vladsavov) <a href="https://twitter.com/vladsavov/status/835934178013245445">February 26, 2017</a></blockquote> <script async src="//platform.twitter.com/widgets.js" charset="utf-8"></script> <p>But the show is not just about mobile phones anymore. Technologies which are set to become part of our daily lives thanks to the Internet of Things and next generation 5G networks were also on show.</p> <p>“Not only connecting people to each other but also to connect the world around us, vehicles, drones, healthcare they are all be connected by this 5G network,” said Matt Branda, Director of 5G Technical Marketing Qualcomm.</p> <p>Virtual, Augmented and Mixed Reality are known for gaming,but there are very practical uses for healthcare. <span class="caps">HTC</span> Vive glasses allow medical students to look at the human body and actually feel it. </p> <p>“We integrate some form of haptic device that enables you to steer a tool that you may use during a virtual operation but also then to feel, actually feel the difference between bone, between flesh, between fat all of the different tissue types,” explained VR Fundamental founder, Chris Scattergood. </p> <p>Pepper, an attractive and endearing ‘iron’ lad, is the latest generation’s Softbank robot. He is able to analyse the emotional state of who is talking to him and even advise you on what books to read.</p> <p>“They behave like humans they use whole body to talk, body language, that’s engaging for people they are pro-actively waving-customer. The results of that is that were already deployed 10,000 robots that are in stores, in hotels, welcoming customers giving information about products and about services,” said Nicolas Boudot, Sales Director of Softbank Robotics.</p> <p>It is claimed that robots and last generation drones make our lives easier. Drones have increasingly become very important for instance in rescue missions for which they are ideally suited.</p> <p>“If you need to find a missing person you will benefit from using a thermal camera, because then you can set the range and only look for body temperatures, so you can scan a large area much faster and that way you can focus on the rescue part of the mission instead of the search part.” </p> <p>‘This is very helpful for anyone doing inspection or vertical infrastructures such as wind turbines or telecommunication towers but also for architects or constructions sites monitoring progress over constructions,” Caroline Briggert, Head of Stakeholders relations, <span class="caps">DJI</span>. </p> <p>In the next few years we need to be ready for self-drive cars, connected houses, smarter cities and industrial environments. </p> <p>“Even if mobiles, technology and hyper connectivity is transforming our interaction, the truth is that one of the most popular activities at this exhibition is the face to face meetings companies are holding to try to close commercial deals,” reported Cristina Giner, euronews correspondent in Barcelona.</p>