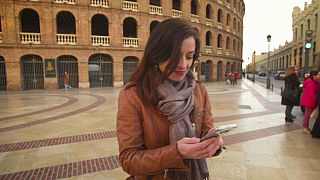 Urban sprawl is the reality for two out of three people living in Europe. This edition of Real Economy comes from the Spanish city of Valencia.

As we move to urban economic powerhouses for jobs and opportunities we also have to deal with critical issues like economic hardships, such as housing, transport and pollution. And that is really forcing cities to start thinking of how to become smart cities.

Around 80 percent of Europe’s energy is used by us as city dwellers, but we contribute around 85 percent of the continent’s GDP. Now as the world’s urban population is set to double by 2050, it might be a good idea for us to understand what a smart city is.

Everyday we connect life’s dots, to wake up, go to work, socialise and sleep.

Connections that know when your next bus to work will arrive, and is capable of controlling the traffic to decrease congestion. Finding you a parking space.

Smart cities take all the elements of urban life, creating a technological platform that allows citizens, businesses and governments to communicate and work together.

Smart cities have until recently been large ones like Barcelona or Amsterdam, but smaller cities are catching up, piloting or planning to implement smart city strategies.

Leading the way in Europe with the largest number of these smart cities are the UK, Spain and Italy.

Europe has put urban development at the heart of its plan for 2020. With a significant chunk of its European regional development fund earmarked to help smart cities, along with other funds that can be mixed and matched by cities and national governments.

The logic? Well it is quite simple: that smaller cities after the crisis are going to have a tough time raising the cheap funding they need to do the infrastructure transformation a smart city requires – municipal budgets have been cut and debt levels tend to be quite high.

Valencia on your mobile #appvalencia#smartcityhttp://t.co/gvMY2MzYql

Fanny Gauret set out to see how Valencia is starting its own smart transformation.

Inspired by Europe’s large smart cities, Valencia began its transformation in 2012. I’m heading to the centre of urban innovation to find out how far they’ve come.

Tools like AppValencia allow locals get real time information on buses and bikes, alerts about the city, and even pay bills online. This is integrated into the smart city management platform – a first in Spain.

“It is a horizontal platform, in the way that it integrates the information collated from all services and also the external information generated by companies,” explained Rafael Monterde-Diaz, CEO, Las Naves Urban Innovation Centre, Valencia City Council. “The citizens are able to use the data. The private sector in general can develop apps, solutions that the city can benefit from, because it gives us a solution for a service, but also it is a viable business model that allow them to generate profitability.”

Valencia has budgeted over one billion euros for its transformation. More than half of that amount will be contributed by the European structural and investment funds.

An example of how the change will help Valencia’s residents is the traffic management control centre.

Basically we have real time control of what is happening in the principal avenues of the city,” added Monterde-Diaz. “The control of traffic lights, we can change the frequency to facilitate emergencies, for example, or avoid traffic jam.”

The system reduces pollution and can lower costs for utilities – so it’s getting another six million euros from the Spanish government and the EU. Companies such as Telefonica are helping it happen.

In the business world we have dedicated to themes around the Internet of Things, and amongst them, smart cities,” Kim Faura, General Manager Catalonia, Valencian Community, Balearic Islands and Murcia Region, Telefonica Spain, told Euronews. “We have in our pocket a sensor that gives a lot of information. It is said that by 2020, millions of things will be connected.”

“Our smart city strategy has allowed us to learn a lot about the resources we have in the city,” said Monterde-Diaz.

“Parking spots, street lamps, rubbish skips, they are in place, but now we need these objects to speak to us, and they’ll communicate over the internet, allowing us to manage more efficiently.”

It is now up to Valencia to communicate and interact with the citizens, universities and companies to fully develop its strategy.

Because that smart digitalization is critical to our booming urban population growth.

Conversation with Ximo Puig, President of the Valencian government.

A coherent strategy and building trust among citizens is imperative for a successful smart city. In a region like Valencia, that job falls on Ximo Puig. He is the president of the Valencian government.

Maithreyi Seetharaman, Euronews:
How are you building trust for a smart vision for Valencia and what is that vision?

Ximo Puig:
We came from a situation of mistrust in the public sector fundamentally because of problems from the past. It is still difficult but progressively results support the process and gradually there are more citizens, more companies that trust in this system of innovation that affects all of us and that most certainly is lead by the public sector together with the private sector.

Maithreyi Seetharaman, Euronews:
What is the state of Valencia’s economy and how are you going to use technology to build on the strengths and curtail the weaknesses?

Ximo Puig:
The Valencian economy has grown 3.9 percent in the past year. Valencian companies and workers are overcoming great challenges
We have a problem in adapting education to new companies and this is a fundamental element. We also have an issue with language skills. We have a problem with everything related to the incorporation of education into an innovative society. For example, The Valencian community will be the first community in Spain to be connected on line. This is a fundamental element to finally bringing all citizens, all families, all companies together into a real information society.

Maithreyi Seetharaman, Euronews:
How hard has it been for you to raise the money that you need from the capital markets or have you had to turn to grants and funding.. and in some ways do you think it sets some kind of precedent or example for other cities who are trying this strategy around Europe?

Ximo Puig:
We have to combine funds. Private funds like banks, companies and there is also the non-profit sector. There are diverse possibilities of capital contribution from the private sector but of course we need European funds, we also need our own funds. It is a process.

We have the same problems as other different European regions. It is evident that there are more advanced regions and less advanced ones. In the end, this is about Europe having a project in favour of all of European regions facing this fundamental challenge which is an information society, a communication society.

Maithreyi Seetharaman, Euronews:
Mr. Puig, on that note thank you for your time.