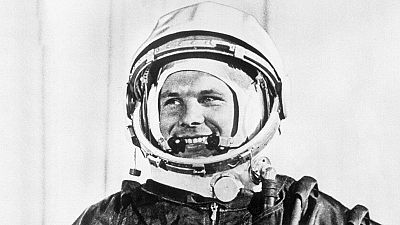 On April 12, 1961 cosmonaut Yuri Gagarin became the first man in space, an achievement that marks the beginning of human spaceflight and was humanity’s first step into the cosmos.

Gagarin stands very high in the minds of astronauts and cosmonauts.

Gagarin launched from the Baikonur cosmodrome in Kazakhstan, and completed a single orbit of Earth in his Vostock 1 spacecraft. He ejected from the capsule at an altitude of 7,000 metres and parachuted down to Earth.

The flight was another Soviet win in the ‘space race’ between the US and communist Russia, after the flight of Sputnik 1 in 1957. The competition between the two superpowers arguably came to an end with the Apollo 11 landing on the Moon in July 1969.

Gagarin continues to be celebrated as a hero in Russia and around the world. “Gagarin stands very high in the minds of astronauts and cosmonauts, and in the international space station you have a portrait of Gagarin who is there looking at all the occupants of ISS,” Swiss ESA astronaut Claude Nicollier tells Euronews. “He opened the doors of space for all of us.”

Former ESA science director Roger-Maurice Bonnet remembers Gagarin’s flight. “It was a totally risky operation, and that’s what we liked about it back then. I was young, 24 years old, and it looked extraordinary. And it was,” he says.

“I’m always impressed when I look at the life of Gagarin, how hard a life he had had,” recalls Shuttle veteran Nicollier. “He came from a very modest family, and he was just 27 years of age when he did his flight.”

The technology of the time seems at best basic in comparison with modern space equipment, and there were genuine fears that Gagarin would not be seen again alive. “We were not absolutely sure that a human being would not get really sick,” says Nicollier. “We knew, we had good reason to believe he would live, because Laika was alive for a while at least in orbital conditions; so was Ham, the chimpanzee on the US side, so there were good reason to believe a human being would survive, but still there were a lot of question marks.”

Gagarin was feted in many parades and celebrations when he returned to Earth, and became an icon of Soviet life. “The risk, the success, and the happy smiling face of Gagarin was perfect for (Soviet leader Nikita) Kruschev,” says Bonnet. “The son of a potato farmer, it was a real demonstration of what a Soviet astronaut could be.”